Amy: Beyond the Stage

Professional hairstylist Tracey Cahoon designed Amy Winehouse’s hair from 2003 until 2010 and was central in creating her trademark beehive.  A stunning wig that Tracey made for Amy is currently on display at the Design Museum in London making Tracey one of very few artists to have their hair designs included in such a carefully curated collection. 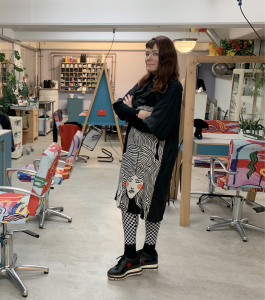 The towering, elaborate creation was worn by Amy in 2007 at a day-long video photoshoot for You Know I’m No Good and has remained with Tracey ever since. It has never been on show until now.

Sitting proudly in a glass case and attracting plenty of attention, it is part of the museum’s Amy: Beyond the Stage exhibition which celebrates the legacy and creativity of one of the greatest musicians of our time. It brings together an amazing collection of personal objects now in private ownership and which will never be reunited.

Tracey, a sought-after consultant, art director and session stylist who has worked with many top models and personalities on countless photoshoots, short films and videos, created Amy’s beehive look which set a worldwide trend adopted by celebrities and millions of young women who wanted to look like their musical idol.

Born in Northern Ireland, Tracey has her own creative space in London’s vibrant Peckham Levels and first worked her magic on Amy’s hair when the singer was just seventeen, on the brink of her meteoric rise to stardom.

“I worked with Amy’s hair on her first-ever photoshoot and she had lovely, luxurious dark hair, always worn down,” Tracey says. “At the end of the day we had a little chat and she asked me if I thought she would suit a beehive.

“I literally grabbed the moment, sat her down and created a beehive. She loved it. The photographers had left at the end of the session but I used my Polaroid and took a little, intimate photograph of it.” 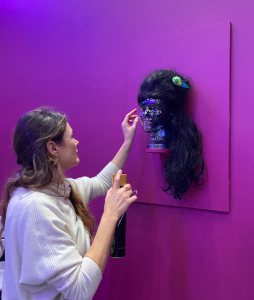 Amy was already earmarked for success and her rise to fame was firmly established when she appeared on The Charlotte Church Show, where her beehive made its first public appearance.

“It really suited her and became her iconic trademark, setting an enormous trend in 2007-8 with young girls. It was even worn by the models at the Karl Lagerfeld for Chanel fashion show.”

Tracey regularly worked backstage with Amy, making sure she looked her best at many big gigs, including the Glastonbury Festival. She even flew with her by helicopter to Scotland for a gig and has wonderful memories of the times they spent together.

“The beehive look meant everything to Amy as part of her whole vibe,” Tracey recalls. “We gave it a different identity now and then, decorating it with little birds, little roses. Sometimes we used a full wig, sometimes hairpieces with Amy’s own hair dressed over them.

“The wig on show at the Design Museum is one of two I made for a videoshoot. It was going to be a long day so we needed a spare so we could keep changing and refreshing them. At the end of the day I took the extra one home and it has been with me ever since.”  The wig was prepared using mousse, then set with heated rollers, before being backcombed into shape.  To blend the wig seamlessly with Amy’s hairline her own fringe sat against the piece.  It was then held in place with hairspray and then distressed to make it look slightly unkempt, distinguishing Amy’s beehive from the more polished vintage equivalents.

“I was approached very discreetly by PR guys about the possibility of me having an item for the Amy: Beyond the Stage exhibition. When we spoke, they said ‘OMG, you have a wig that’s been worn by her’.

“The night before I took it to the museum, I dressed it and was upset to realise that we had always decorated it but it was too late now to get any small birds The wig had to be carefully packed for the journey by cab and first thing next morning I rushed to a shop in Peckham to get lilac tissue paper, Amy’s favourite colour.

“At the shop, I glanced up and hanging right beside me were little birds, just like the ornaments I used to decorate the wigs. It was magical, an almost spiritual moment.

“So the wig in the exhibition has two birds, one for Amy, one for me.” 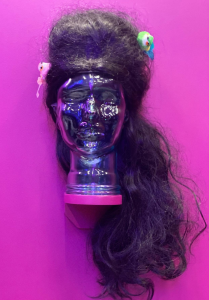 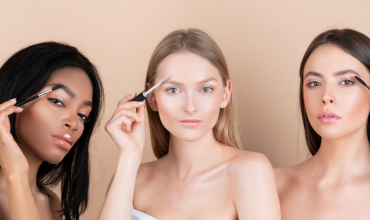