He’s an award-winning makeup artist and one of the best-known names in the industry with a bio that lists every famous face since the 1990s.  2020 was a busy year for Gary Cockerill with the launch of Make Up Intelligence, his new range of cosmetics.

Formulated for great coverage as well as to care for the skin, Make Up Intelligence products contain high quality ingredients including Hyaluronic Acid, Vitamins C and E, Aloe Vera and Jojoba Oil, along with natural extracts of cucumber, peach and lime.  Suitable for any age or gender, products boast effortless application, mood-enhancing effects and long-lasting formulas, with many products being multi-purpose.  We caught up with Gary to chat. 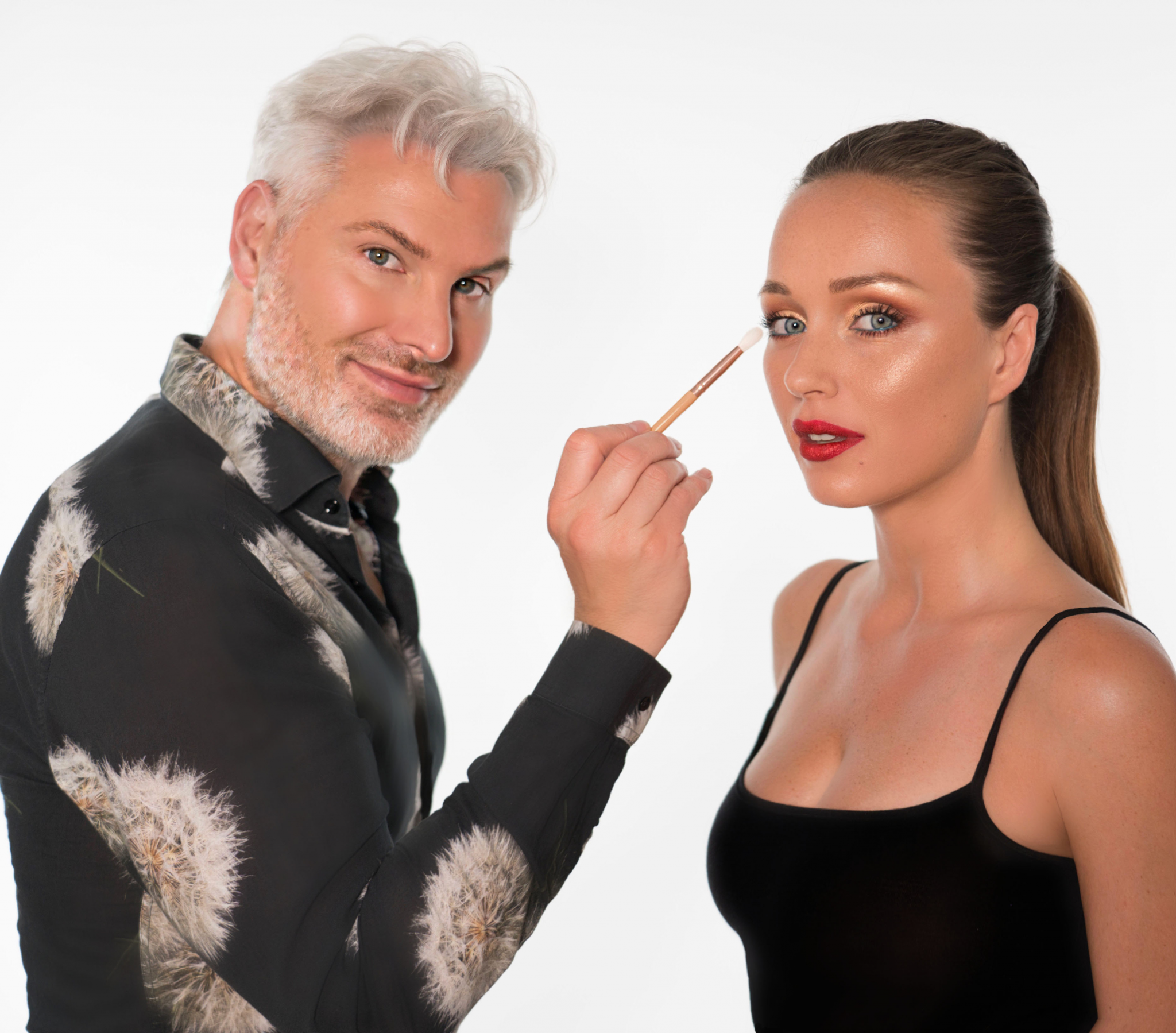 The last time we talked, you thought that your range would be ready in a year or two – and here we are five years later.  Tell us about the background to the range.

It’s been two or three years in the making with this brand, Make Up Intelligence, especially over this last year, but we’ve managed to make it work.  I’ve known QVC for many years and when I went to see them about a year previously and showed them what we were doing, they loved it and wanted to get it out really soon. 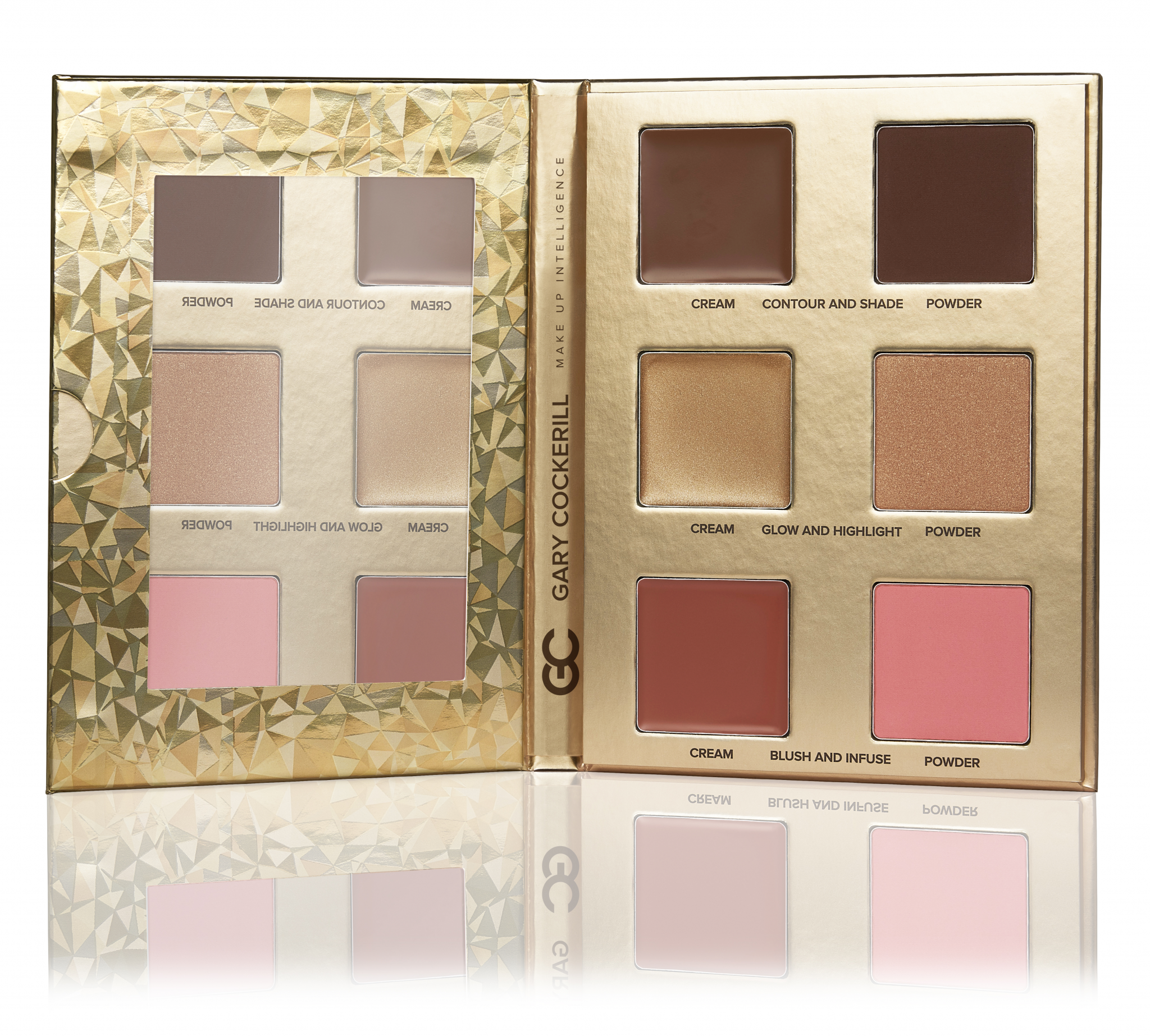 Alongside your own website, you partner with QVC to retail the range – how does that work?

The viewers at QVC have taken to it and it’s been selling out all the shows.  Next, I’ll go to different territories and, who knows, perhaps into stores eventually.  The QVC buyers are so into beauty – they know products inside out.  I’m in great hands.

Being on a shopping channel has been an incredible thing for my range when people haven’t been able to shops and try things out.  The QVC audience is so brilliant and the presenters are so good at their jobs.  My shows have been one hour each straight from the beginning and you normally build up to that.  They’ve had so much faith in me and my brand, and I’m very grateful for that. 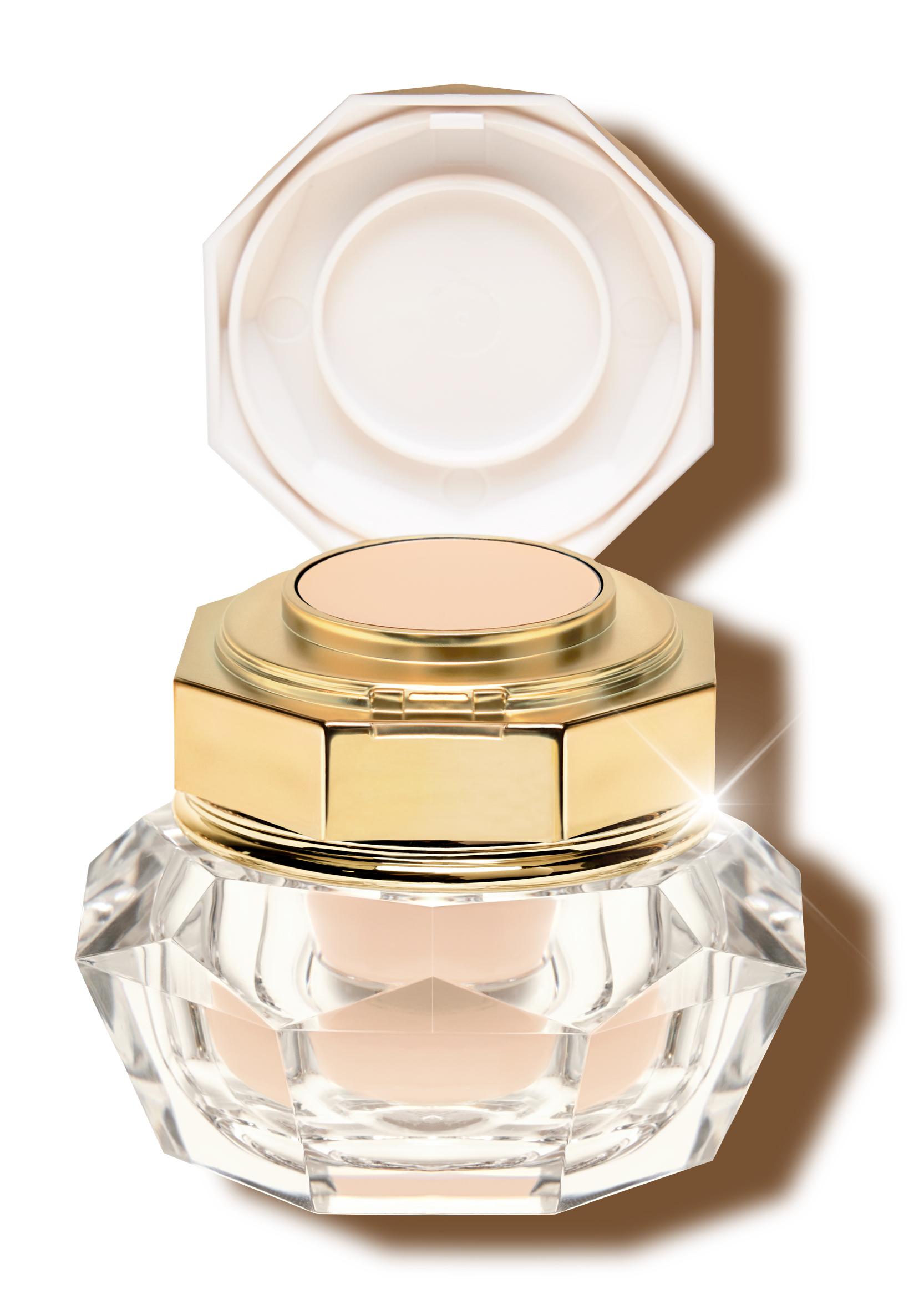 You’ve been in this industry for such a long time and yet you hadn’t launched your own range.  You’ve taken your time.

It’s all about timing and now is a really exciting time for me.  It’s a natural progression of my life and I’ve always had good teams around me.  I’ve got a really amazing team of people now who could make this happen for me because I could do nothing without them.  I’m really grateful.

It probably wasn’t the right time previously even though I thought it was.  I was too young and was still getting experience of life.  I’m now 51 and it’s a natural progression of where I am in my life.  My career was so crazy before; running about looking after so many famous people and doing so many things that you forget about yourself – and I did – and suddenly as I got older, you move on to different things and this was a new part of my life – the most exciting part – where it’s about me and my brand.  I’ve got a fantastic team that I work with.  There are only four of us, it’s not a massive team, and my PR lady as well who is lovely.  We only launched it 4½ months ago and we’re starting to get some really positive press and good reviews which is really important.  I want to stay with QVC for a year exclusive, but I might stay with them for ever because if it can work for Joan Rivers, it can work for me.  There’s no better place: they make you feel so at home and part of the family.  I’m really privileged and excited to be there. 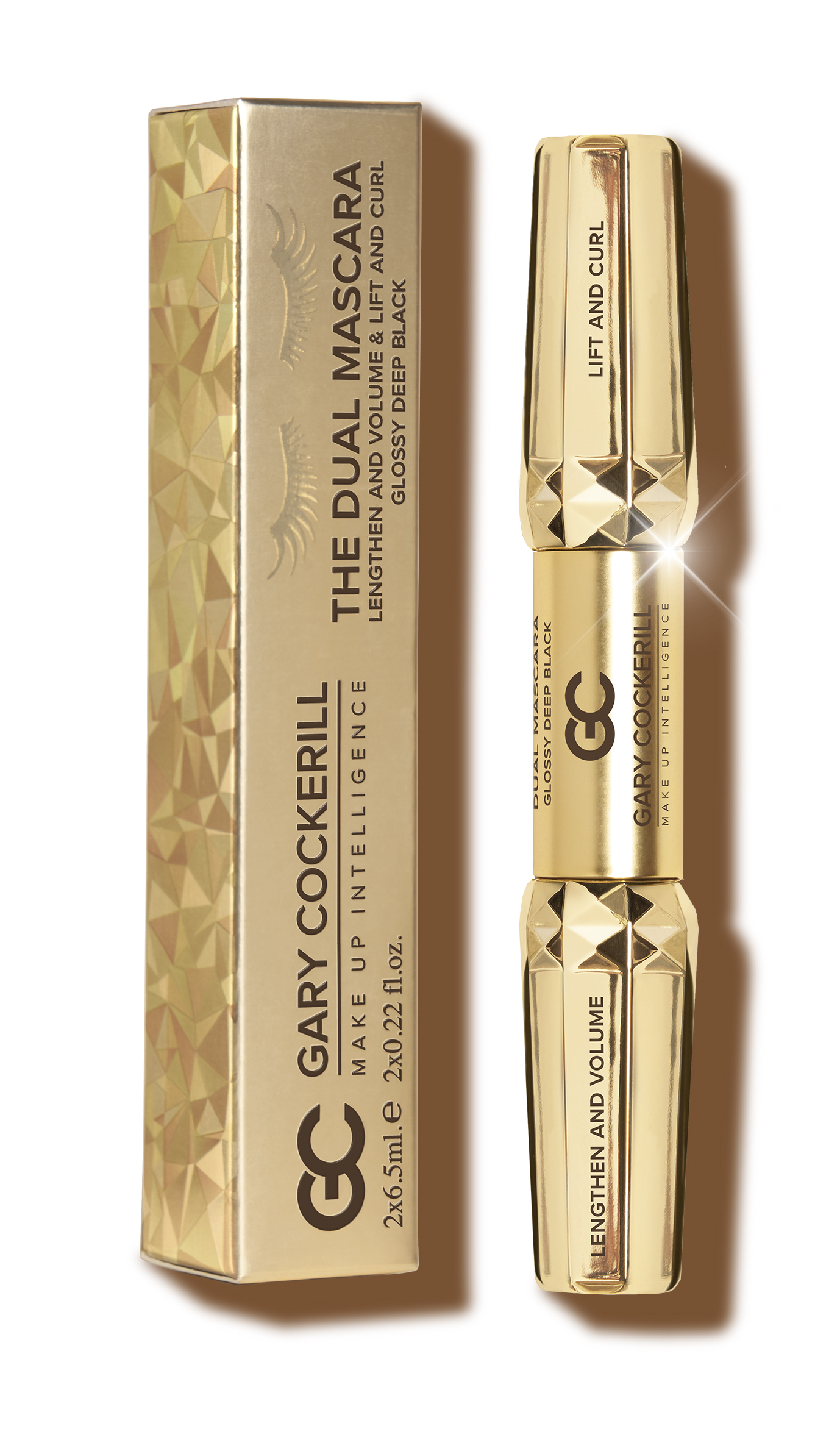 How involved have you been in the design and creation of the products and packaging?

All my products are about longevity – professional products that I thought a lot about.  I designed everything with the team, I put a lot of ingredients in – what I wanted to put in to make them do what I wanted them to do.  I wanted to do everything that ticks all the boxes, looks inviting, looks good on the dressing table.  I’ve always loved gold and went for the really light gold for most of the packaging and then we introduced colour to some of the eyeshadow palettes. 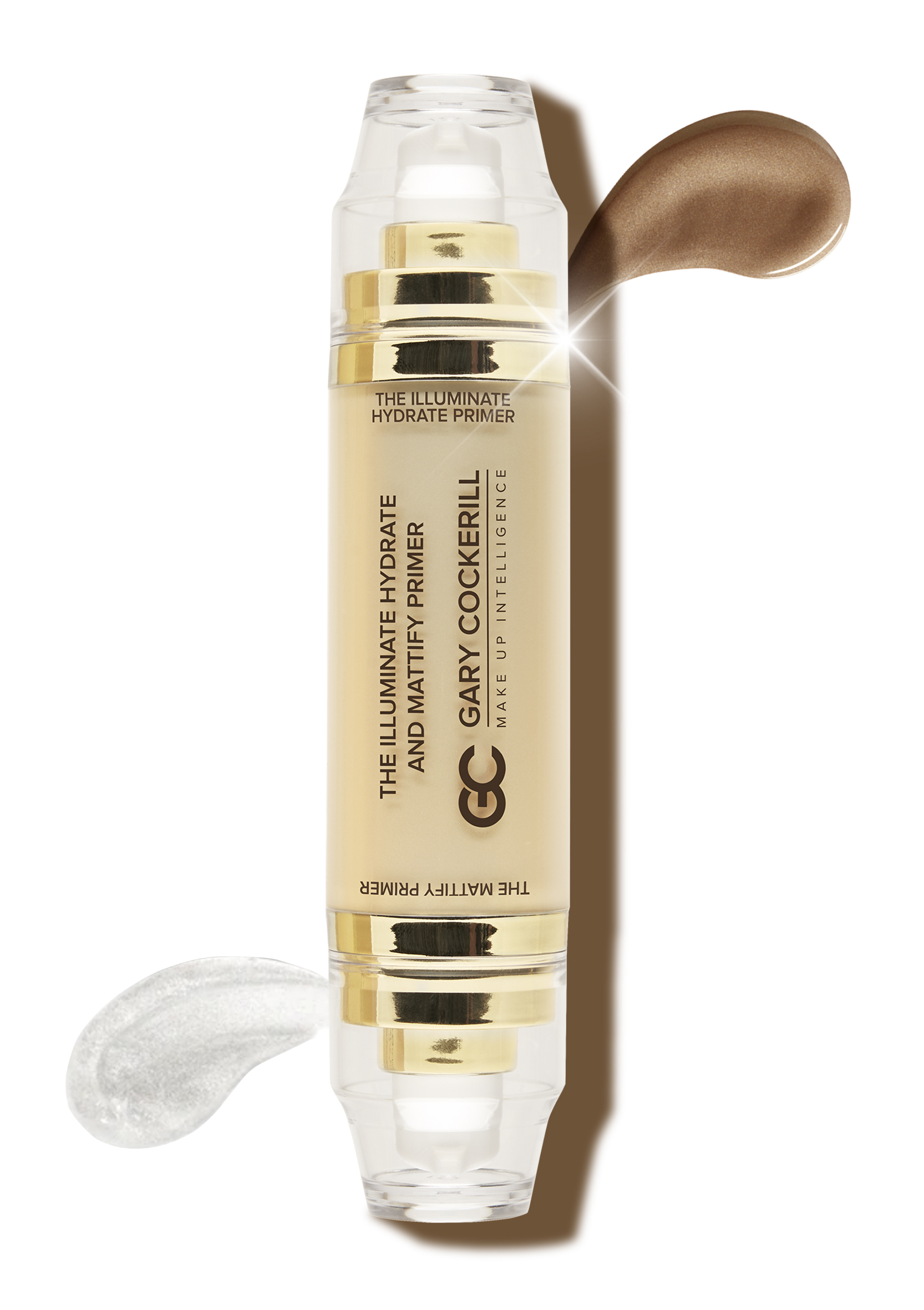 Which are your favourite products and why?

That’s so hard to answer.  We’ve only been out five months and I’ve already brought out four palettes.  The true hero product in the range is Cover Conceal and Correct (£42) which is the foundation; the Illuminate Hydrate and Mattify Primer (£38); the Dual Mascara (£26); the eyeshadow palettes – Timeless, Wonderland, Autumn Glow and Summer Lovin (£38) are great.  The lip colours are liquid lipsticks – Lustre Liquid Lipstick and Lip Liner (£26).  I’m building a brand and you either love a liquid lipstick or you don’t so that’s a very personal choice, but this year I’ve got some amazing, beautiful lipsticks coming out that aren’t liquid lipsticks and lots of different glosses, face palettes, cheek palettes and things like that. 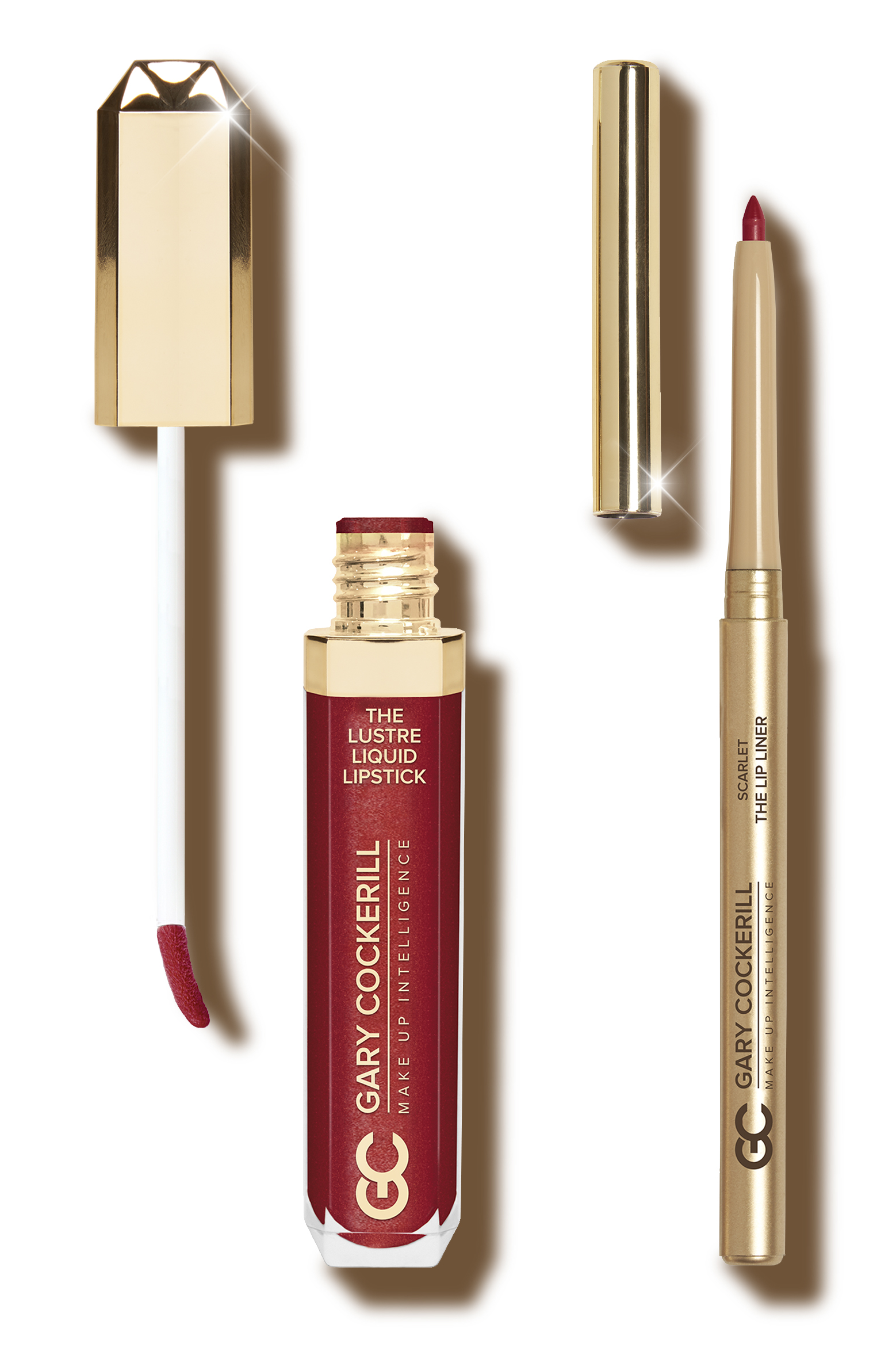 Are they aimed at pro, consumers or both?

Anyone can use them.  They’ve all come from times when I wanted to product to do something and couldn’t find exactly what I wanted so I made them.  That’s why I called it Make Up Intelligence –does the thinking for you.

There are 48 SKUs now at the moment.  The foundations go from fair to mahogany; contour palettes are light medium and dark; there are eight liquid lipsticks and then more for this year.  Foundations and mascaras are totally sold out everywhere, the formulations are absolutely fabulous.  The foundations feel so good on the skin, they’ve got coverage but still feel dewy.  They have colour correctors in so you can disguise blemishes and hides rosacea, and then we’ve got a concealer in it.

Lots of the products are dual purpose.  The mascara has two ends on it – one end which lengthens and volumes, the other lifts and curls.  The primer is to illuminate and hydrate at one end then mattifier at the other end because no one has perfect skin.  We’ve all got combination skin so we might want to illuminate and hydrate the cheeks, but mattify the t-zone so I give you two – then you’ve got the choice rather than having to buy two.  The foundation has the concealer in the lid which is a brightener really so it just lifts the face and melts into the skin and works beautifully with it.  The eyeshadow palettes are multi-dimensional they all have matte, shimmer, sparkle, highly pigmented then some of them have glitter.  The Wonderland palette, which is the party one, is all sparkle, then I put a primer in the palette so it doesn’t drop on the face and you can actually stick it to your eyes.  There’s a double-ended dual eyeliner in all the palettes as well, so in Wonderland there’s navy and deep black while Timeless has black and nude.  The liner in the Autumn Glow palette has deep plum at one end and sage green at the other.  Everything has worked so perfectly, then in 2021 my packaging changes again – still with the gold but without the faces on the front – we’ve got this quite art deco feel to the new ones. 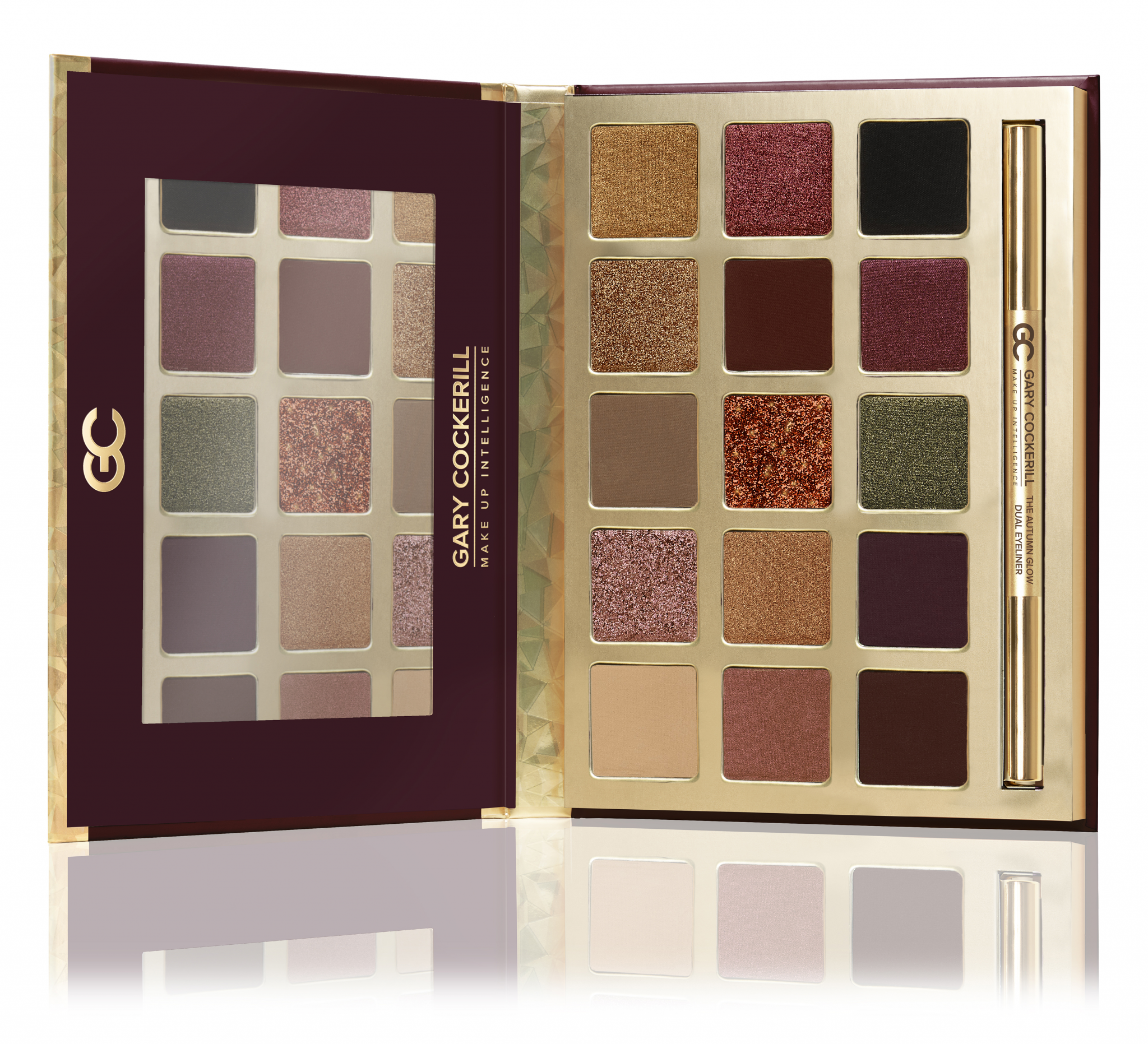 Are you finding a wide age range coming to your brand?

It’s really mixed because the QVC audience is a woman 35-40 upwards and we’re doing more social media now too, so reaching a younger audience.  My signature style has always been about beauty – when I was booked by FHM, GQ to do the covers with celebs, I made them look glamorous.  On the runway at that time, it was all about heroin chic and I was the polar opposite.  I was beauty and glamour, and that’s what actresses, celebs, presenters of the time wanted and they all booked me and before I knew it my diary was full with five jobs a day, every day.  I’d do a presenter, then a late night tv show, then an actress for an appearance on a talk show, next a model ready for a big shoot or an American who had flown in from Hollywood for a premiere.  It was so crazy; I couldn’t do it at that pace now. 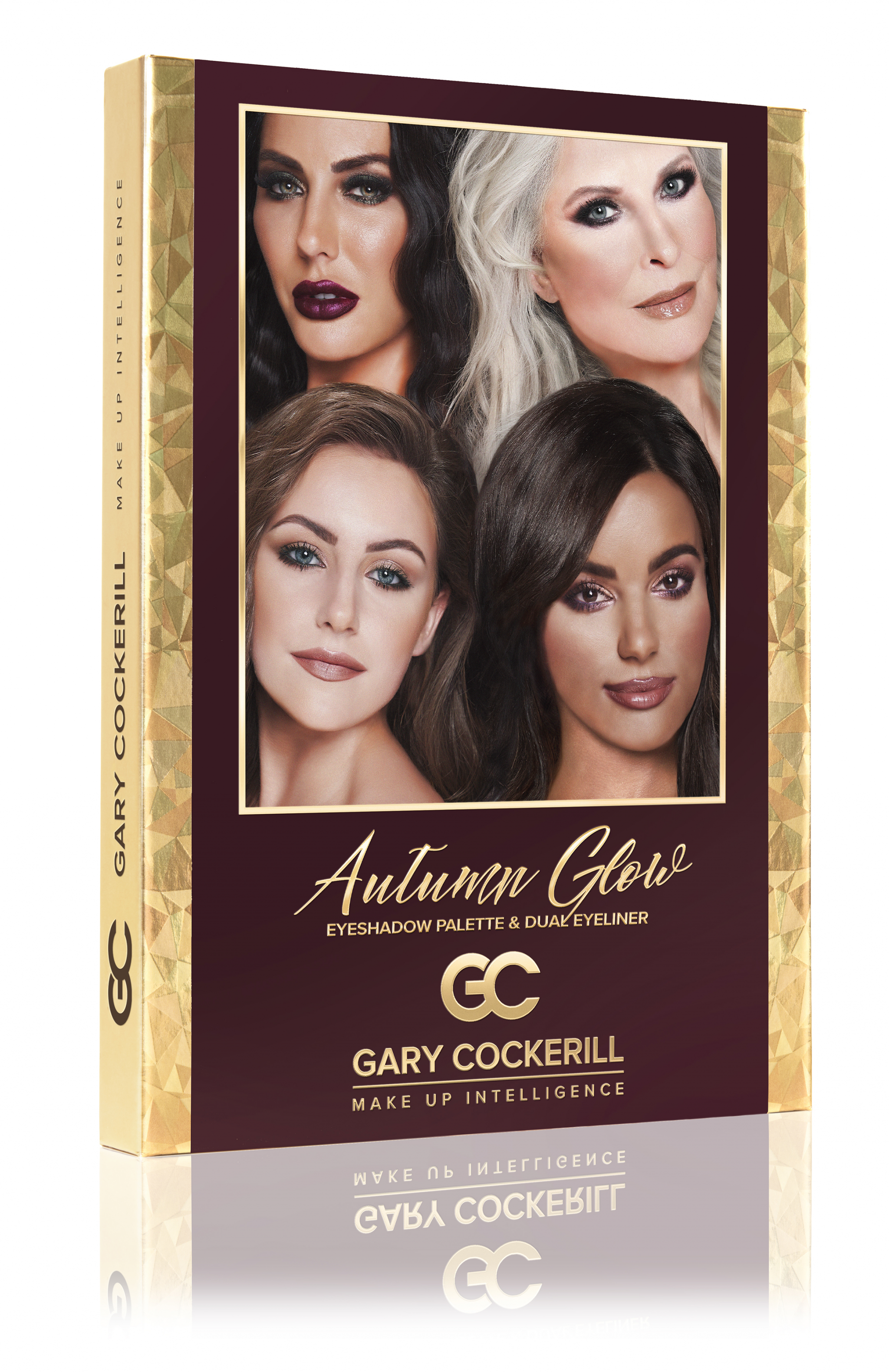 We love the tutorials on your website – do you plan to do more?

We had to do it like this because I couldn’t do anyone’s makeup when we launched and I still can’t.  I’ve got loads more than I’m going to add when I can.  It’s the same on QVC, I’ve got an hour’s show and a lady who isn’t a makeup artist is doing her own makeup in a two-way mirror from scratch.  It’s worked so well because I can talk about it and explain it and show it on my arm.  I can’t wait later this year to get back to me actually doing makeup on air.  I’ll still have the two-way mirror because it works really well.

What would you say to our student readers who worry about finding work?

If you’ve got a dream and a goal, you will get it – that one thing that catapults your career or changes your life, it might just work working with one photographer or doing one test shoot with a model, then someone sees your work and it takes you to another direction.  I think everybody deserves a chance to follow their dreams.  I get that it’s a more difficult time now because it’s more saturated which it wasn’t when I started – you could name the amount of male makeup artists at that time on the fingers of one hand.  We were all working and all earned well because the rates were very good then.  It definitely had to do with the people I was working with – it they’re going to be working, you’re going to be working. 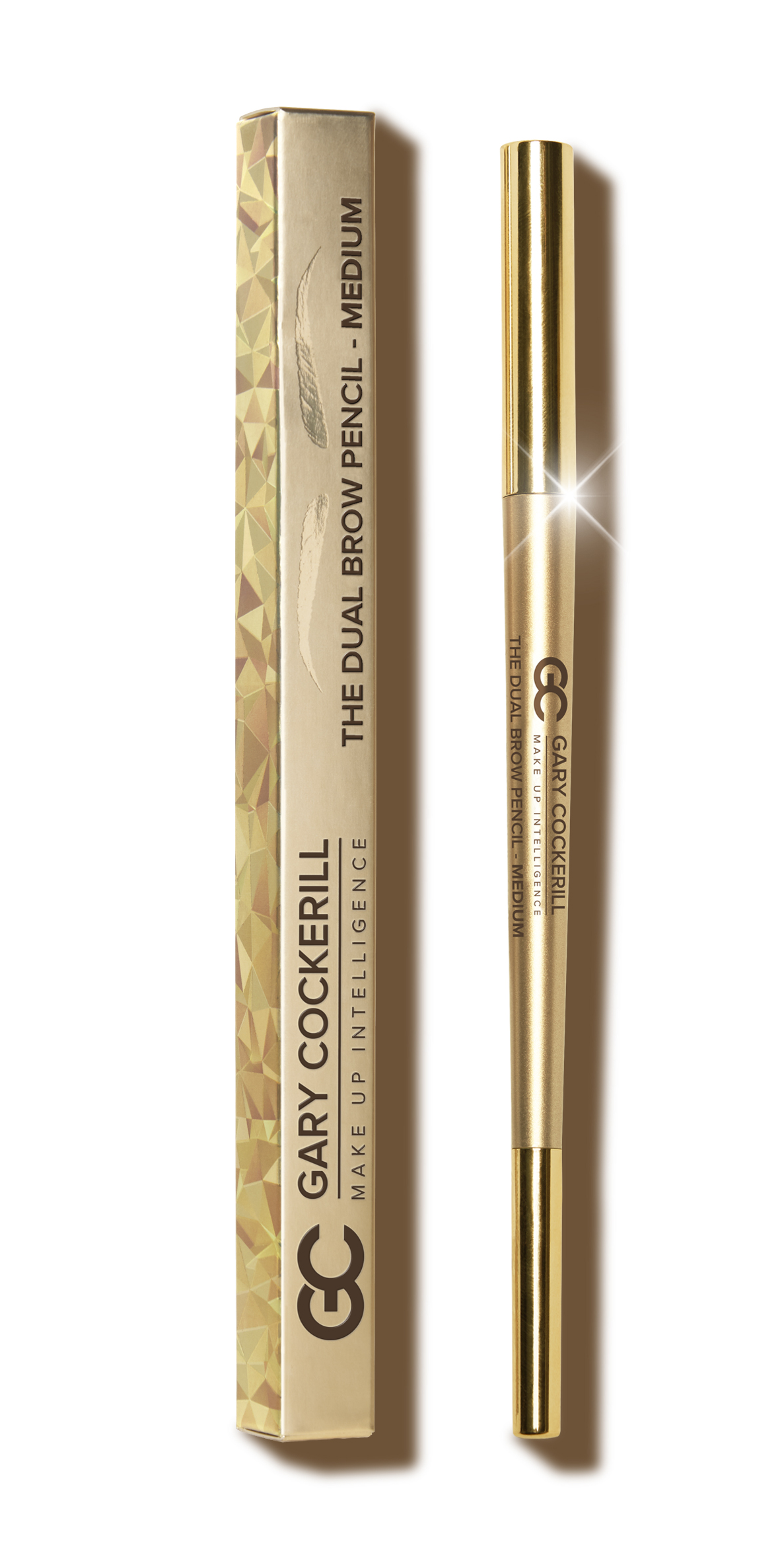 There’s so much debate around self-taught versus the traditional college route.  What would you advise for aspiring makeup artists?

I’m self-taught with an artist background.  I went to Art School and got my diploma in Illustration and Photography.  I’ve always had an eye and loved art; I do think you need to have that flair and a passion for what you want to do.  A passion to make people look different and beautiful is really important unless you’re going into SFX and that’s all about creating something else.  It’s never done me any harm being self-taught; now with how things are, with regulations, if you’re a beauty therapist or doing certain things you’ve got to be trained, you have to be because nobody wants someone working their face who doesn’t know what they’re doing.

What’s next for you?  Will you be bringing out a range of brushes?

Brushes aren’t a massive thing on QVC; they seem to do it as a gift with something.  I probably will do brushes that as a professional artist because I need to do that really.  I do have some amazing body products coming out for the summer this year that gives a glow – in six different colours for different skin types.  I’ve got loads, but I don’t want to give it all away yet.  Watch this space.

Makeup Intelligence GC is available from QVC and makeupintelligencegc.com 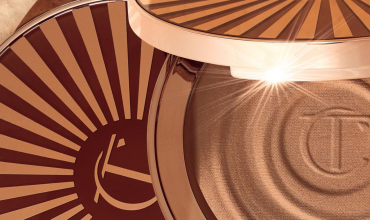 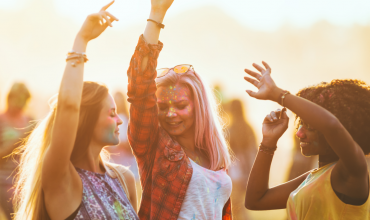