In the first in a new series, Student Life, Warpaint welcomes our newest contributor. 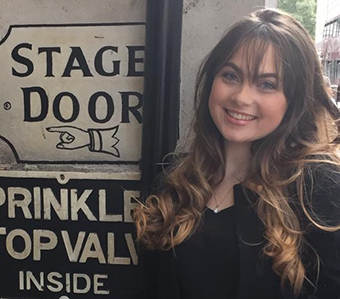 I recently got the chance to attend a Makeup Armoury Masterclass run by Jan Sewell and Chris Lyons of Fangs FX.  In this feature I’m going to be telling you everything I learnt at this masterclass.

Before I attended, I made sure to do some research on Jan and Chris.  Jan Sewell’s work as hair and makeup designer features in many famous films such as The Theory of Everything, Everest and Bohemian Rhapsody while Chris – who has been called the Tooth Fairy of Hollywood – makes prosthetic character teeth and facial effects for many films including the Harry Potter and Star Wars series and The Iron Lady.  After finding out their impressive achievements, I was even more excited to meet them and learn their tricks of the trade. 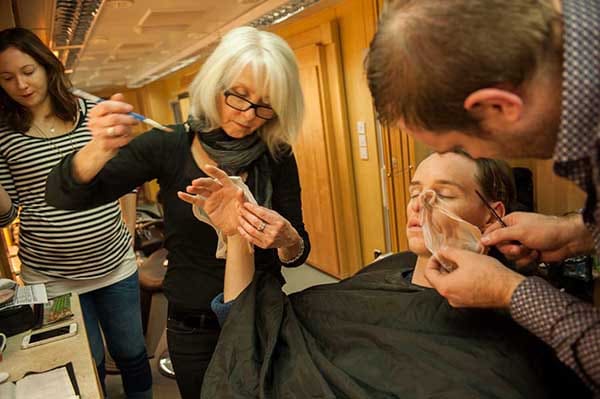 As soon as I arrived, I was greeted by two lovely ladies (and a dog) who said the masterclass will be starting soon and that I could browse around until it started.  For the next ten minutes, I wandered around in amazement at all of the products and different colours.  I previously hadn’t covered prosthetics and special effects at college and definitely did not know that there were so many options to create a look.  After looking at face paints and brushes, we were all taken upstairs and sat down around a backdrop, chair and a table full of makeup.  Unfortunately Chris Lyons was no longer able to attend so Jan was going to be doing the masterclass alone to teach us how she created the snowy, frostbitten looks when on set for Everest. 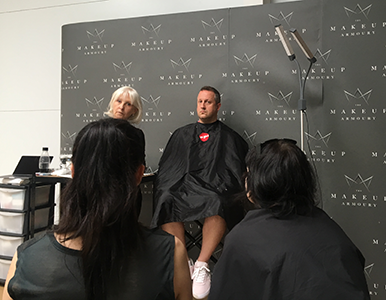 Firstly she showed us how to break the skin using just makeup and no prosthetic pieces.  Using an aubergine colour and a fan brush, Jan feathered and patted all around her model’s face focusing more around his nose and forehead.  Next she did the same but with a mauve colour.  Jan explained that this can be done using a sponge however she prefers using a small fan brush and keeps multiple with her when on set.  After the mauve, she feathered a soot colour around his nose.  Jan said to never use black and to always use a soot colour instead as it is easier to layer and build up creating a more realistic final result.  To make the nose look as though there is a hole in it, Jan used Maekup Crude Oil which is a water based oil (£24.50).  As a lot of special effects makeup can be really expensive, we were given a great tip – you can buy a product with your friends and just depot it into little tins so that everyone gets the product at a cheaper price.  After the crude oil being placed on the nose in a circle, Jan layered on a tobacco colour.  To make her model’s beard appear frozen Jan used Maekup Snow Paste (£7.50) and just placed this in his beard and hair.  Finally she placed water activated snow in his beard and hair and spritzed him with water from a spray bottle, so as the snow starts to expand, the cameras can capture it. 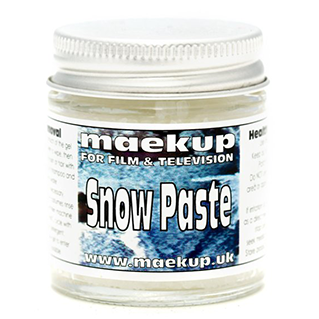 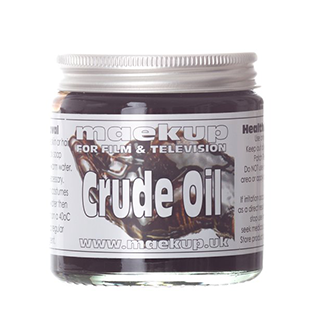 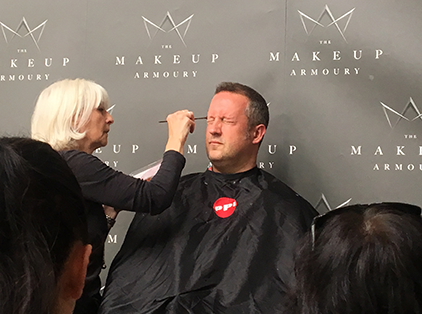 Throughout the master class Jan gave us countless tips and tricks such as using a fan brush instead of a stippling brush for texture and to always practice your looks first.  One thing that Jan said multiple times is to layer the colours to make it look more realistic and natural.  For example when doing the hole in his nose, Jan used aubergine, mauve, soot and tobacco instead of going in with just black.  By layering makeup, you can easily achieve a 3D look without using prosthetic pieces.  Jan also touched upon illusions and scales, for example when doing the makeup for The Theory Of Everything to make Steven Hawkins’ head look slanted, she used teeth; making them slightly slanted throughout the film.  You could also use contact lenses and copy a photograph. 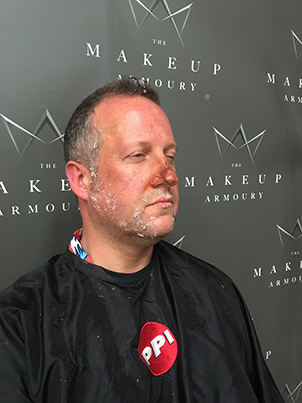 At the end of the masterclass Jan asked for questions so I asked if she had any advice for getting into the makeup industry to which she had lots.  Jan said it is really important to connect with people in the industry so you can build up your contact list; you can do this by attending masterclasses such as this one and going to trade shows such as Professional Beauty, UMAe, Olympia Beauty, The Prosthetics Event and IMATS.  When at these events you can collect emails then write to ask for work experience. Remember to be persistent and send emails more than once to show you are eager to help.  When going to an interview or creating a project, Jan said research is key!  One idea she had was to get a notebook or binder to put all of your research in then you can re arrange it for interviews accordingly.  Don’t just research makeup, also research colours and textures and, look in forensic looks for real life wounds.  Always volunteer to assist or shadow people because these can give you the connections you need in the industry. 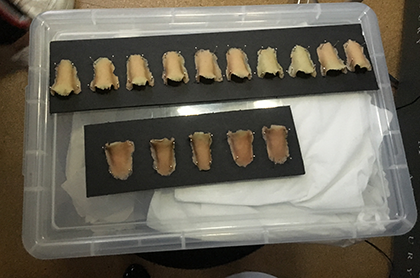 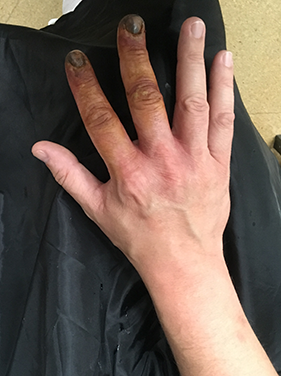 So to sum up my experience at The Makeup Armoury workshop, I walked away having learned a lot more about special effects makeup than when I went in.  I met some interesting people and enjoyed the relaxed atmosphere created by Jan and her team.  A big thank you to everyone for making me feel welcome and for such a great evening.

I would like to also say a big thank you to Emma and Warpaint for this opportunity and an amazing evening! 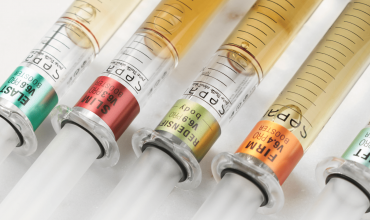