Hello, I’m Ella Rolph, 2nd year student on the Brushstroke 2 Year Make-Up & Hair BTEC course.  Towards the end of last year, I worked on a fantasy hair project for one of my course assessments.  In this feature I share the process from start to finish. 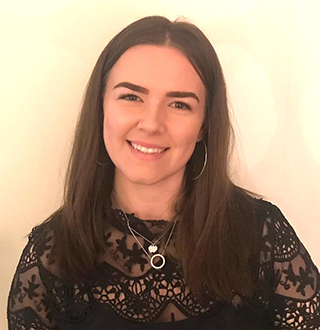 I really like working with hair and understand the importance of developing these skills to make myself more employable.  Earlier in the course, tutor Rachel Bartlett, an avant garde and braid specialist, had taken us through a range of techniques she uses to create some amazing pieces:

This really opened my eyes to the kind of work out there as well as the transferable skills I would be learning.

So, back to my BTEC assessment brief: design a fantasy hair style based on a production of your choice.  It was a simple, straightforward brief, but one that involved a lot of creativity, planning and detailed work on my part.

I chose a character from the film, Alice in Wonderland staring Mia Wasikowska and Johnny Depp.  My Queen of Hearts creation is based on the Red Queen played by Helena Bonham Carter.  I know the two fictional characters often get mixed up so apologies to fans of the original books by Lewis Carroll.

This is how I planned and created my Queen of Hearts with the very patient Merry Coton, my model and fellow student.

So, with just Queen of Hearts as a starting point, I began researching avant garde hair styles, particularly on Pinterest.  Gradually I found what I wanted: images of massive structures on top of models’ heads and covered by, or actually made out of, hair.  These became my reference points together with some squiggly, curved patterns that I could introduce into my fantasy hair structure.

I decided to use wire for the main structure which, as I discovered, is very difficult to work with.  Although I could use any kind of material to wrap round the wire, I used synthetic hair because I wanted the heart-shape to be as clear and obvious as possible.

Right from the word go, I didn’t want the shape of the heart to be symmetrical, in keeping with the avant garde tone of the structure. And as Rachel says, “There’s no right or wrong.  If the brief lets you, just go with your gut feeling.” 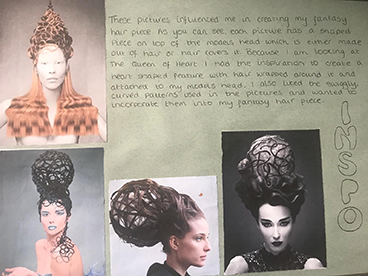 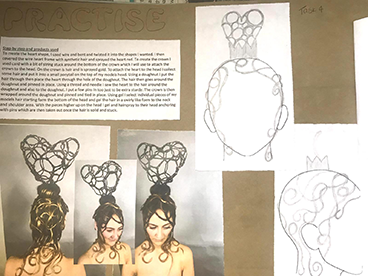 The Planning and Process of a Fantasy Hair Creation

Creating my Queen of Hearts fantasy hair structure took around 21 hours in total.  I hadn’t worked with wire before and it was hard twisting and bending it into the shape I had drawn.  In the end I just grabbed hold of the wire and got stuck in!  Once I’d achieved the shape of the heart, I wrapped the hair round it and glued it into place.  The fluffy ends of the hair then had to be gelled and the whole structure sprayed red.  Though the process was reasonably straightforward, it was also time consuming to get right, particularly working out how to attach the whole structure to Merry’s head…

The brief also instructed me to make sure the structure was ‘well anchored’ and sturdy enough for the performer or model to wear it with confidence particularly while moving around.  After much thought and several practice runs, I decided the most effective way to attach the heart to Merry’s head would be to section a bit of her hair on the top of her head and tie it into a ponytail.  Then I’d use a doughnut through which I could pull Merry’s hair and wrap it round the doughnut.  Finally, I sewed the heart to the doughnut so then it was ready to be attached to Merry’s head. 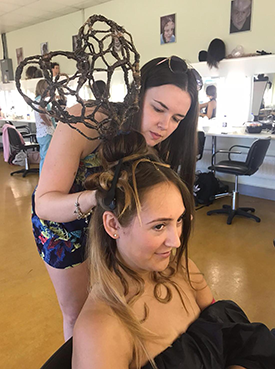 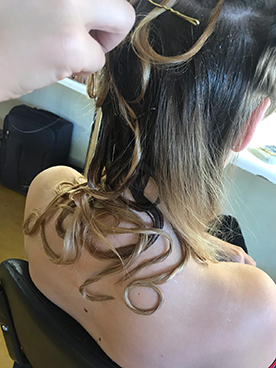 Getting the final stages right

The Day of the Assessment

On the day of the assessment, I had three tasks to complete within two hours:

Gelling hair to her face and upper body

Completing the look with make-up

I had made a crown which I pinned to Merry’s head and onto which the whole heart and doughnut structure sat.  The crown added the extra height I wanted without interfering with the whole look.

Gelling the hair to Merry’s face, neck and shoulders was a matter of following a wiggly line to match the swirly shape of heart structure.

For the make-up, I (naturally) followed a red theme – eyes, lips and cheeks to complement the various elements of my look.  Merry’s lash extensions needed infills which gave them a perfect spidery feel so I simply worked this into the look.  The final touch was placing torn playing cards featuring the Queen of Hearts on Merry and the fantasy hair structure.

Merry confirmed her hairpiece was light and felt strong enough for her to move about naturally.  So we’re done – my fantasy hair project is complete!

I really enjoyed this project and how it turned out.  As well as stretching my creative side, it really brought home how important it is to be super organised.  I had to create something within a time scale, zone in on the detail and get around specific challenges.  That’s exactly why I want to be a professional make-up and hair artist. 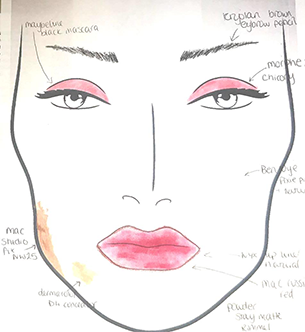 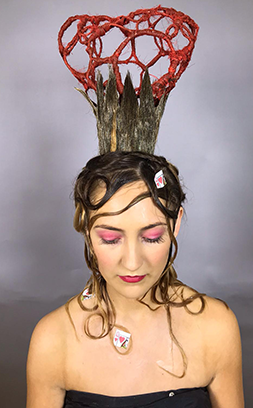 The Queen of Hearts fantasy hair

Where can you use Fantasy Hair Skills?

The kind of fantasy hair piece that Ella created definitely has its place in the world of entertainment,  whether specific fantasy and avant garde creations for performers like Lady Gaga, films such as Maleficent or fashion shows across the world.

Broad hair – and wig – skills are very important for the make-up artist.  The ability to cut, trim and style hair is expected of artists in film, TV, stage, fashion and music, which is why they feature so much in the Brushstroke syllabus.  We also teach creative skills because they are valuable and transferable: from planning and research to focusing on detail and helping to achieve a designer’s vision through a creative and resourceful approach. 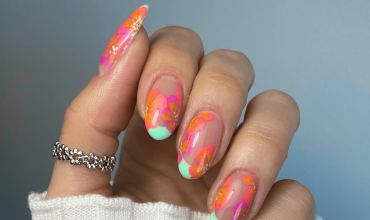