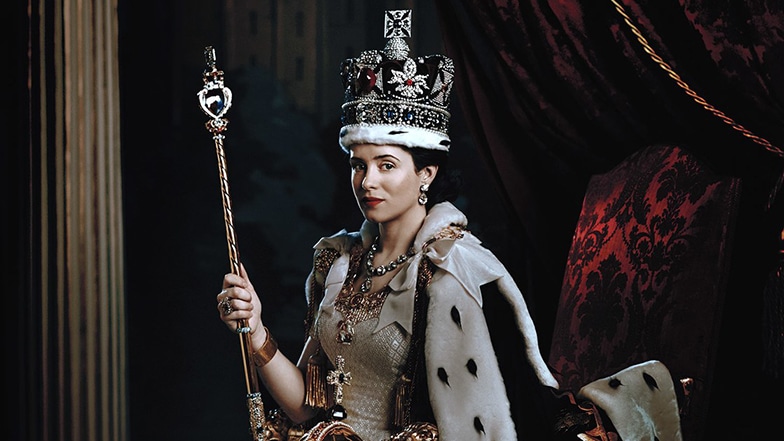 When it comes to playing Good Queen Bess, either the 1st or the 2nd, most people have a fairly good idea of what they should look like. Queen Elizabeth I is probably as iconic as they come, with her striking red hair and pale (albeit lead-ridden) face.  Our current Queen Elizabeth is one of the most photographed Royals ever, her whole life from baby to great-grandmother chronicled with a million images.  The challenge for any make-up artist, is to make the actress credible as that Queen, while maintaining the essence of the performer.  We’ve gone back through the archives and found some of our favourite Queen Elizabeths, both medieval and modern. 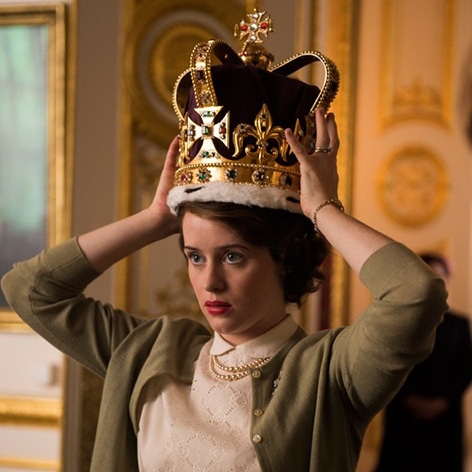 It’s taking the media by storm: Netflix’s extremely expensive production The Crown, tells the story of a young Queen Elizabeth at the beginning of her reign.  Claire Foy (who last played Anne Boleyn in BBC’s Wolf Hall) portays Elizabeth as a 25-year-old princess forging a relationship with Prime Minister Winston Churchill, beginning with her wedding day in 1947.  Each subsequent season is expected to span a decade of the queen’s reign, with Foy playing Elizabeth during the early years.  Make-Up Designer Ivana Primorac was charged with creating many of the well-known faces to feature, from Duke of Edinburgh to Winston Churchill and of course the young Elizabeth. 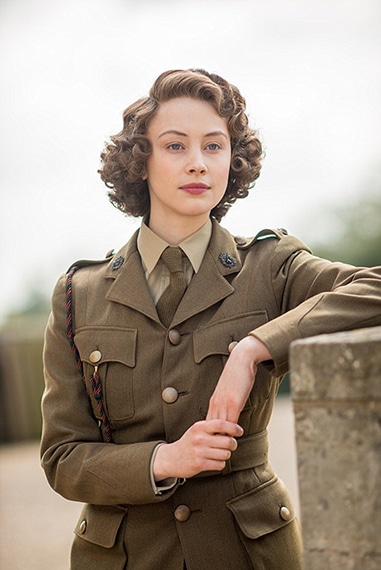 Sarah Gadon – A Royal Night Out

An even younger Princess Elizabeth has a right royal adventure in the British film A Royal Night Out.  Lorraine Hill was the Make-up and Hair Designer and Sarah Gadon the teenage Elizabeth.  Set on the night that WWII ends, the young Princesses, Elizabeth and Margaret escape into London in a 1940’s extravaganza of pin curls and ruby red lips. 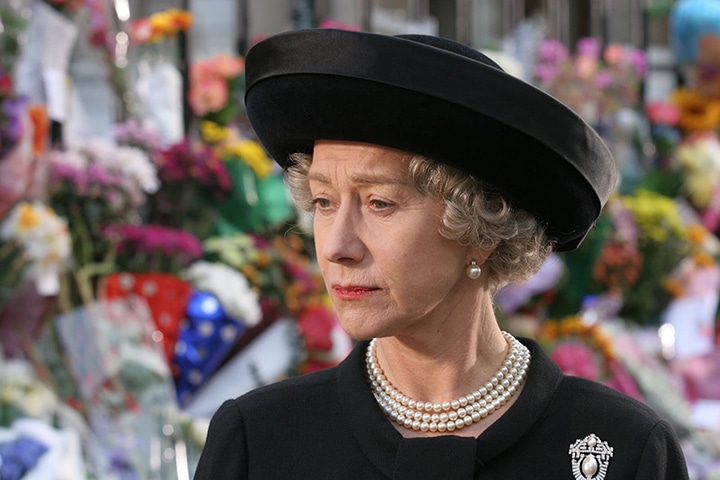 It won Helen Mirren an Academy Award for her portrayal of Queen Elizabeth II in The Queen.  Following the death of Princess Diana, Elizabeth, her family and her country struggle to put their lives back together under the watchful eyes of the entire world.  Daniel Phillips was in charge of making one of our best known character actors look like our Queen during one of the most publicised and difficult periods of her reign.  The look, still so memorable now 10 years after the film’s release, is still recognised as the best of our current Queen.

We can’t help but include Jeanette Charles in Austin Powers in Goldmember.  Already known for her remarkable physical similarities to Queen Elizabeth II, Jeanette Charles has appeared in dozens of portrayals over the years.  Charles has made an entire film career playing Queen Elizabeth II appearing in Naked Gun and National Lampoon’s European Vacation.  Her part in the Austin Powers is brief but memorable, following his arrest of Dr. Evil, Powers is knighted for his services by the Queen.

Rewind 500 years and the first famous Elizabeth was upon the throne.  The feisty monarch was very much a woman in a man’s world with a ruthless reputation and a distinctive look by all accounts.  There was a flurry of fine character actors capturing Elizabeth, most notably Judi Dench, who won an Oscar for her role in Shakespeare In Love.  The Queen’s make-up is similarly extraordinary. Lisa Westcott, the Make-up Designer, explained that as, “the Queen is quite old in the film, she would have terrible skin – probably from mercury poisoning, so it was covered in make-up and her hair was undoubtedly falling out, so she always wore a wig.  Apparently she had over 80 wigs, all different colours and her hairline would have receded from the front, giving her that rather severe look.”  Lisa and her team spent 4 hours daily with Judi Dench to prepare her make-up and finery.  But the work paid off, the first day Dench appeared on the stage set, the entire production went into hushed silence. 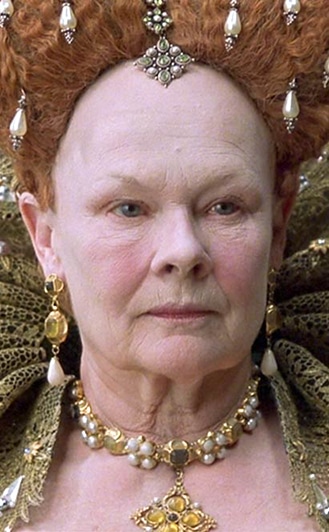 The Queen set the fashion of the time, so those around her in court copied her style.  “Whatever the Queen did,” says Lisa Westcott, “became de rigeur with the other ladies.  Even in her old age, she was a real trend-setter.  Many of the women in the film are therefore also seen wearing wigs of similar shape.” 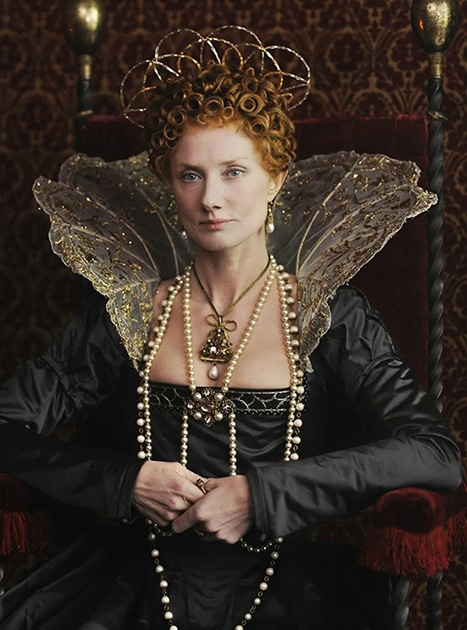 In the 2011 film Anonymous, the Elizabeths young and old is played by mother and daughter Vanessa Redgrave and Joely Richardson.  The story is from the POV of Edward De Vere, Earl of Oxford, who is presented as the real author of Shakespeare’s works.  Edward’s life is followed through flashbacks from a young child, through to the end of his life.  He is portrayed as a child prodigy who writes and performs A Midsummer Night’s Dream for a young Queen Elizabeth I with whom he has an affair (and a child).  40 years later he continues to write but his plays are being performed as the work of a frontman, Shakespeare.  Events surrounding Essex’s rebellion force him to see Elizabeth again, this time played by Vanessa Redgrave.  Make-up Designer was Björn Rehbein with Heike Merker heading up the Hair.  Matthew Smith was the prosthetic make-up designer for Vanessa Redgrave. 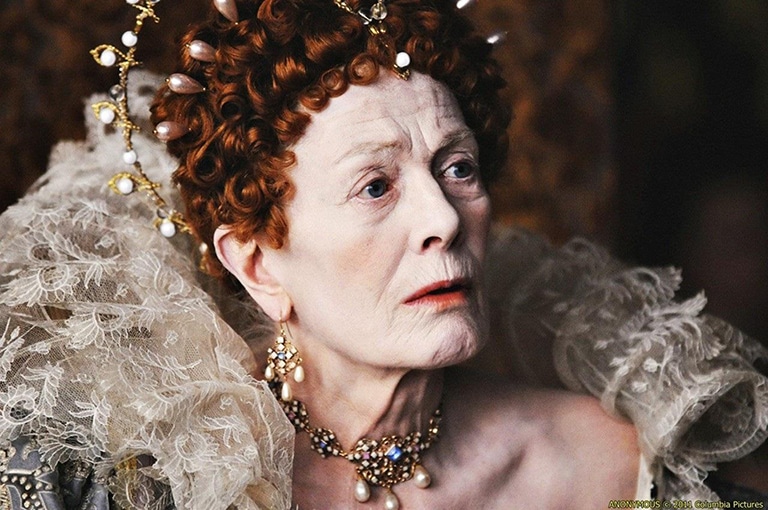 The BBC mini-series The Virgin Queen, tells the story of Elizabeth I played this time by Anne Marie Duff, from the age of 20 to her death at 70 in 1603.  Anne Marie’s transformation is as dramatic as that of some of her predecessors in the role: besides the prosthetics and period make-up her hairline has been shaved and her eyebrows and lashes bleached.  She commented, “I wanted to be a woman of her various ages and have integrity within it, not be doing an impression of something.  I knew that with the make-up and costume I would look good, the prosthetics not only looked amazing but they gave my face restrictions that it wouldn’t normally have and we worked on obvious things like vocal differences and the physicality.  What I wanted to do was to try and find an old brittle bones approach, I hope I’ve achieved that.  I kept thinking in my head, ‘Why on earth have they cast one actress, not two?’ but I just went for it and I hope that it worked.  Neill Gorton was responsible for the prosthetic make-up; Lauge Voigt also sculpted the old Elizabeth’s stomach and breasts for her dressing-room confrontation with Essex and Vicky Bancroft did the on-set application.  Karen Hartley-Thomas was make-up designer. 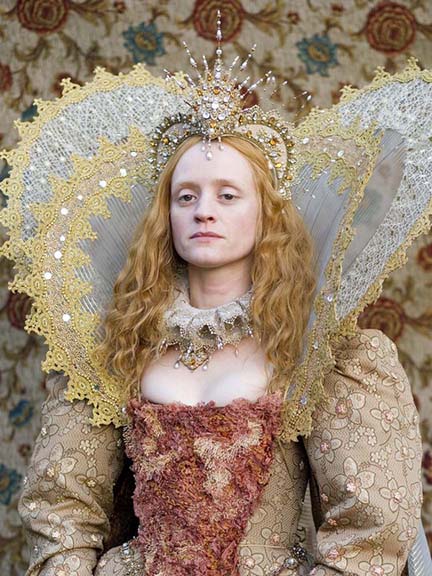 And who could possibly forget Queenie, Miranda Ricardson’s fabulous version of Queen Elizabeth I in Blackadder.  Victoria Pocock was the make-up designer charged with turning Miranda into Queenie, now a cult comedy icon. 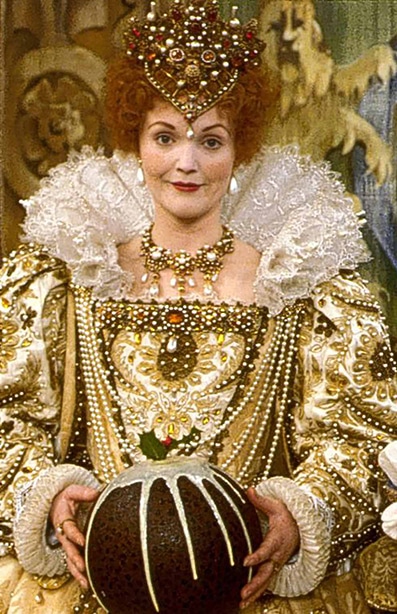 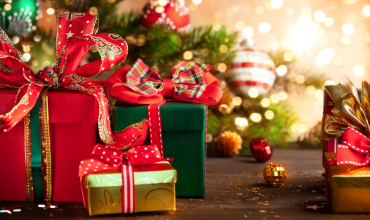