They might have been the dark horses of this year’s Oscar race, but we completely understood the skill behind the work of Eva Von Bahr and Love Larson in The 100 Year-Old Man Who Climbed Out the Window and Disappeared.  Based on the best-selling book, this film had so many obstacles for the duo to overcome – realistic, multi-stage ageing of one of Sweden’s biggest stars, recreating famous faces from history and doing so with a tight budget and time frame.  We had the chance to talk to them about their experience on the film. 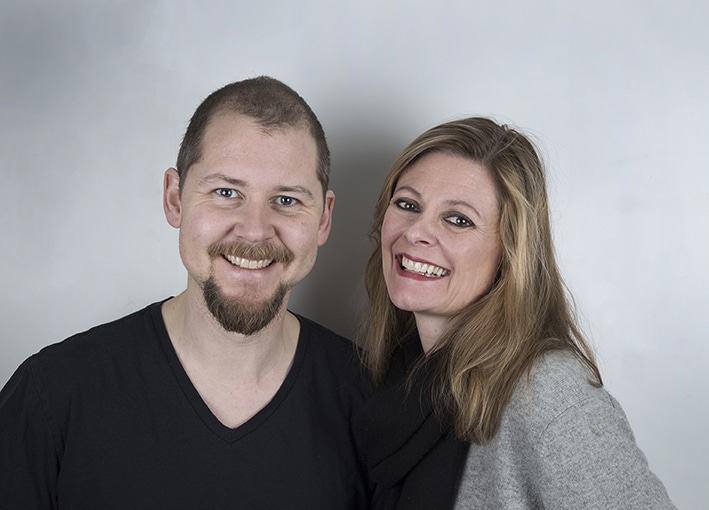 WP:  What was your first experience with make-up, and when did you decide you wanted to make it into a career?

Eva:  I read an article in a newspaper about a make-up artist who worked in film and television.  At the time I was studying economics at university.  I was told that it would be beneficial to know hair if you wanted an apprenticeship in make-up artistry so I took a one year hairdressing course in London.

Love:  My mother worked as an actress in the theatre and I grew up backstage.  I always found it interesting, with things that were supposed to look like something but in fact was something else – like a cake made out of plastic for example.  Later I found books about make-up in the local library and read all I could find on the subject. 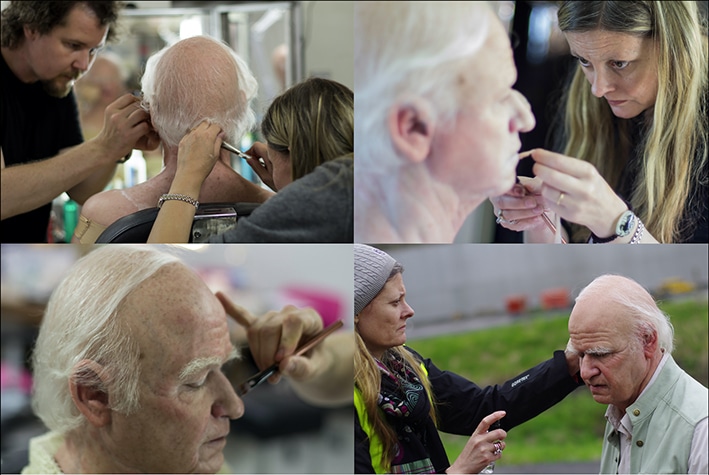 Eva:  After having done the hairdressing course, and after worked three years at a local theatre, I got a trainee position for four years at the Swedish Television in Malmö.

Love:  I studied for three years at the Dramatic Institute in Stockholm, doing make-up artistry and wig-making.  Later I took Dick Smith’s Advanced Professional make-up course.  I do recommend everyone that is serious in prosthetic make-up to take Dick’s course.  It is truly the bible. 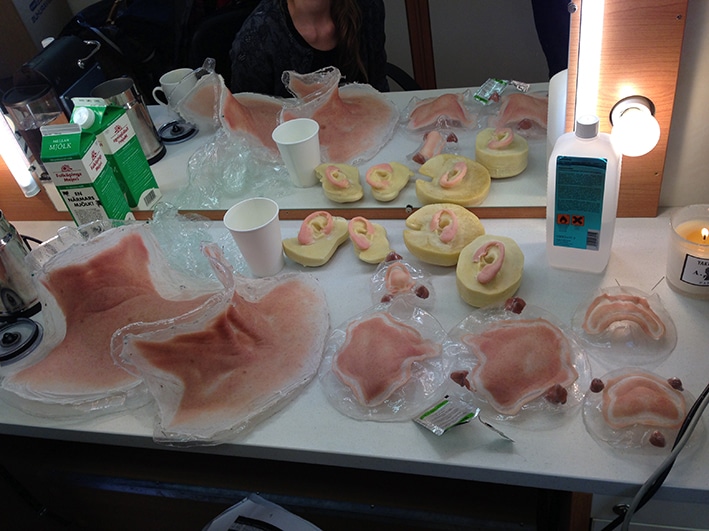 WP:  What are your favourite and least favourite parts of being a make-up artist?

Eva:  My favourite part must be when you are planning a job, trying to find the total look on everything from actors to extras.  Also being so scared of failure so that you are pushing yourself to success.  Whereas my least favourite part is not succeeding in achieving what you want – plus early mornings.

Love:  I agree with Eva that one of the biggest thrills is being so scared of failure that you push yourself extra hard to succeed.  Least favourite things include unpacking after a job and doing your taxes… 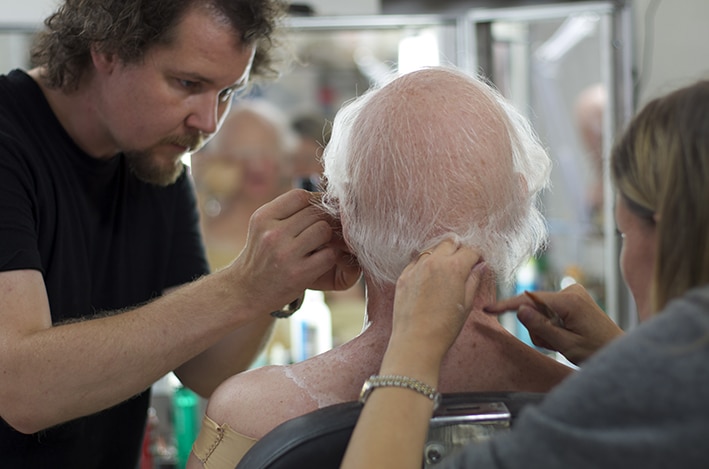 WP:  Tell us about The Hundred Year-Old Man – how did you approach and plan for the project?

Eva & Love:  First we did a test make-up on Robert Gustafsson as the 100 year old stage of Allan.  We thought we had a month to prep that but Robert’s schedule changed and suddenly we only had 10 days to sculpt, make moulds and produce the pieces and hair.  We thought the test wasn’t very successful but apparently the director liked it and we landed the job.  From that design we worked our way backwards to achieve all the other looks for the character.  We had about one month to prep all the eight stages for Allan’s ages up to his final one.  In that month we also made old age make-ups for five other characters, as well as eight look-alike make-ups and looks for all the extras and the other characters in the film.  This was all for the flashbacks; then we had two months to prep the present time part of the film, so we re-sculpted Allan’s ninth and oldest stage for that.

WP:  What were the biggest challenges you faced on the shoot, and how did you overcome them?

Eva & Love:  The biggest challenge was of course to make an old age make-up on the lead actor that was believable and didn’t distract from the film.  We also shot the majority of the film in existing light, mostly direct sunlight, so we constantly had to paint him to compensate for the shifting light, depending on whether it was sunny, cloudy etc. 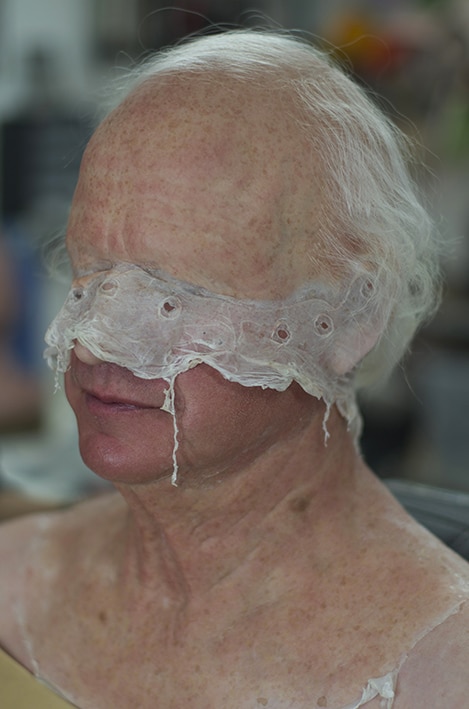 WP:  The ageing make-up is some of the best we’ve ever seen – what advice do you have to other artists who struggle with realistic ageing?

Eva & Love:  Don’t overdo it!  Look at real people and keep it simple.  Old people don`t have thousands and thousands of wrinkles.  Do not look at other old age make-ups for reference either.  We used a very good book, called Happy at Hundred, by Karsten Thormaehlen.  It has got wonderful pictures of real 100 year old people. 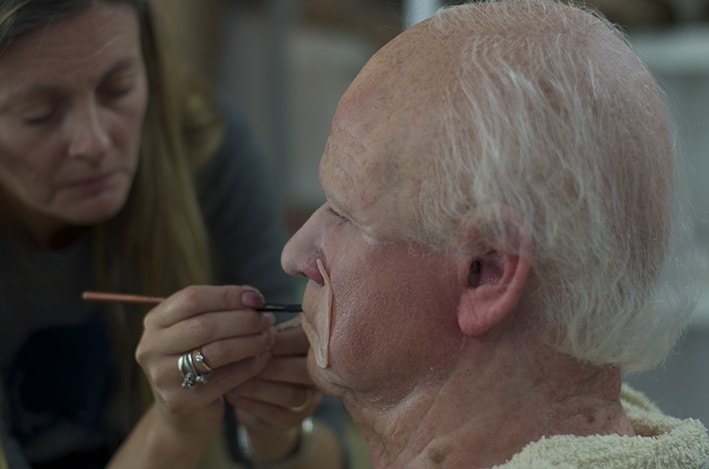 WP:  You’ve both worked on a real variety of projects – do you have a favourite genre or aspect of make-up? (e.g. ageing, wounds etc)

Love:  I don’t really have a favourite genre but I love to do character make-ups.

WP:  What are your top 5 products to have with you on a film set? 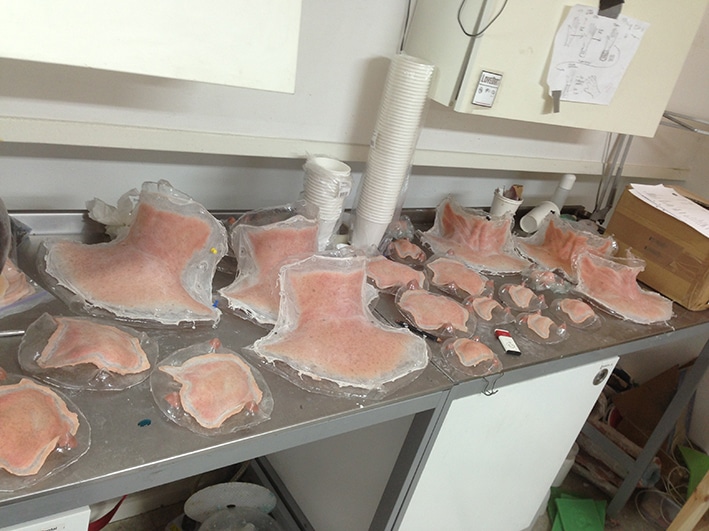 WP:  Do you have any advice for students and recent graduates on how they can stand out from the crowd?

Eva & Love:  Look at good things, look at bad things.  Keep learning!  Take every possibility to learn something new because you are never done.  You do have to be really passionate about make-up, otherwise it is for no use. 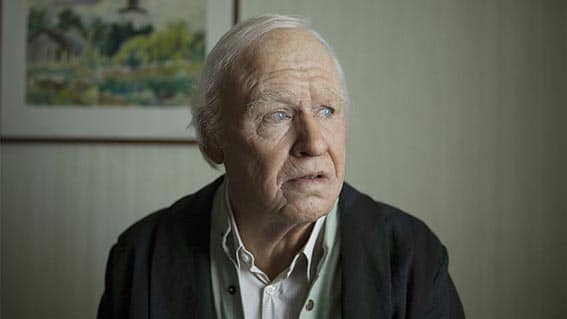 WP:  What is next for you, after the madness of the Oscars?

Eva & Love:  We just completed some work for a film by Tomas Alfredsson called The Snowman and are now prepping for the sequel to The 100 Year Old Man. 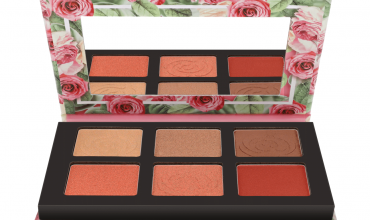