Make-up artist Martina Parmar Bellieni is no stranger to organising events, with 20 years’ experience under her belt including working for IMATS and The Prosthetics Event, so it was a natural progression for her to launch a make-up show of her own.  The Media Makeup and Theatre Event opened its doors for the first time on Saturday 12th March at the Cranmore Business Park Exhibition & Conference Centre in Birmingham, and the lovely Joanna Delilah was there as our reporter to document the day.

The show had a fun and friendly vibe, incorporating a good mix of industry professional exhibitors – including Neill’s Materials, Temptu Pro, Mr Dashbo, Einat Dan and Paintopia – with up and coming artists, illustrators and hobbyists who were showcasing their handiwork and sharing their skills with visitors.  There was plenty of space to wander around with the event, which was split into four main areas: The Main Exhibitor Area, The Creative Artist Area, Workshop rooms and a Student Competition. 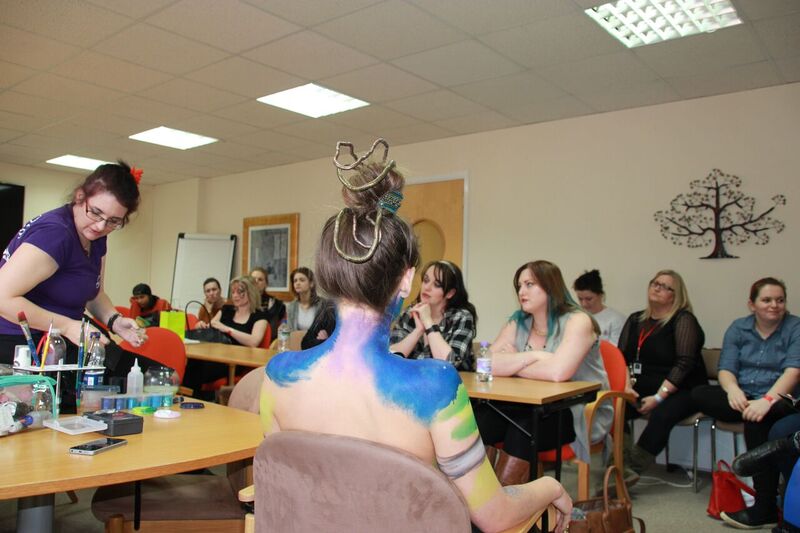 Cat Finlayson of Paintopia during her demo

The show was populated by the talented students from Level Three Theatre, Film and TV Course at Birmingham Metropolitan College, Sutton Coldfield, led by tutor Emma Buet.  The students helped with the smooth running of the event, directing people, acting as runners, modelling for demonstrations and also exhibiting their own make-up skills; many of them had even made their own costumes, which had a Victorian theme.

The Main Exhibitor Area was a hive of activity with retail stands, workshops and demonstrations.  Einat Dan created a show-stopping high fashion make-up look in front of a captive audience.  In her recognisably unique style, she layered face paint with make-up, and embellished the piece with sequins, pearls and tiny mirror tiles.  Dean Garner of Z Brothers treated us to a zombie make-up demonstration using encapsulated silicone prosthetic pieces.  He then teamed up with Mike Dargon of Mr Dashbo, using Dashbo alcohol-activated paints to finish the transformation on his model, who happened to be his wife Emma.  Emma was unfazed by her new look and told me she had lost count of the amount of times she’d been made-over by Dean. 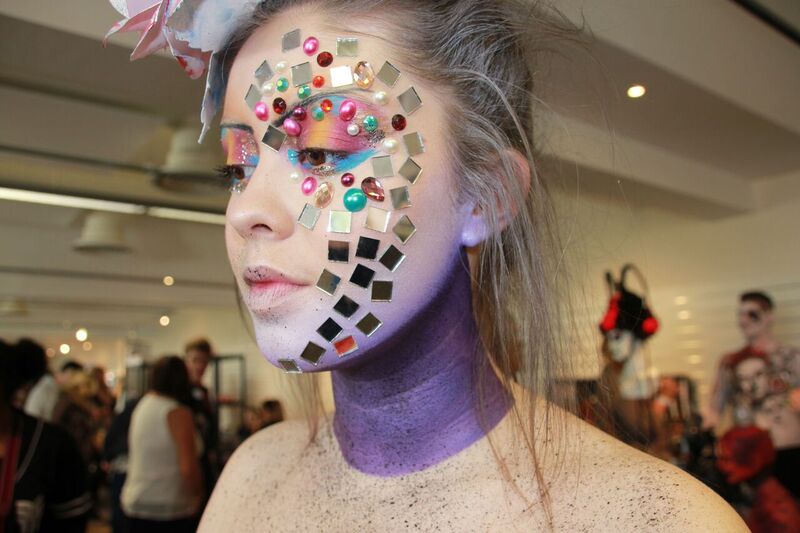 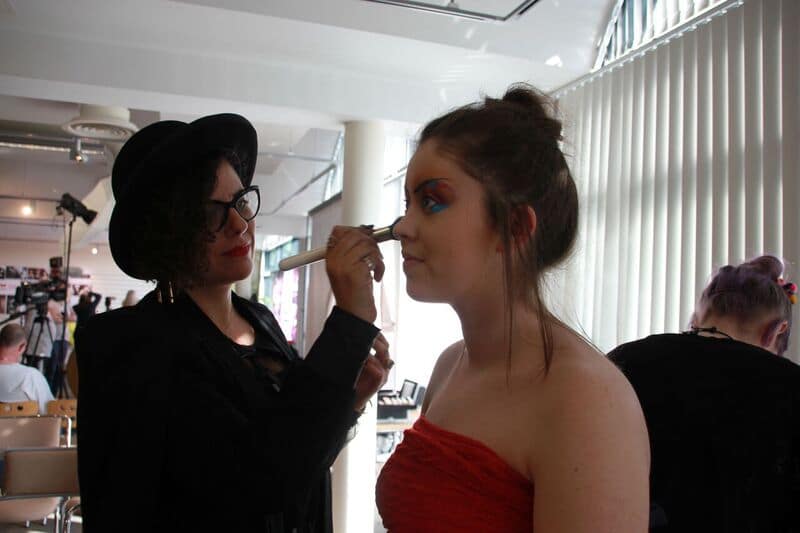 As well as being the event photographer, Tony Cooney of Tt Visuals held a very interesting photography and lighting workshop; using his professional studio set-up, complete with a model wearing a beautiful ivory bridal gown, Tony gave tips and tricks of the trade, sharing his experience with attendees. 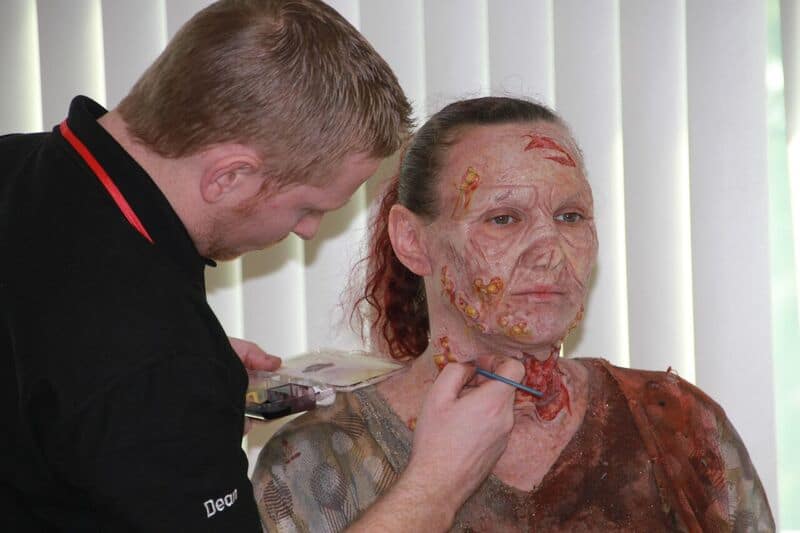 Paintopia brought with them their latest acquisition: the innovative Stylepro brush cleaning system.  The Stylepro launched last month at Professional Beauty London, where Jennie Roberts and Cat Finlayson were demo-ing on the Warpaint Live Stage.  Armed with freshly-used bodypainting tools, they tracked down inventor Tom Pellereau having connected on Twitter.  After speaking with Tom and having a play with the product, Jennie immediately decided to stock them in her web shop.  The Stylepro was put to the test at the Media Makeup and Theatre Event by Cat, who created a stunning body paint on Paintopia model Gracie Williams.  She continually amazed visitors each time she cleaned and dried her paint-sodden kabuki brush in minutes, and was able to use the brush straight away to continue her work of art. 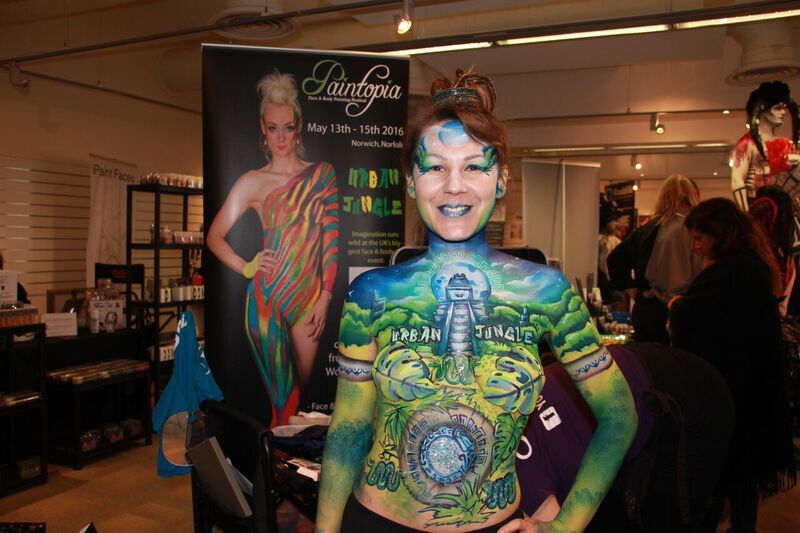 Artists Victoria Gugenhiem, Suzanne Forrester-Beer and Elissa Barret were among those showcasing their talents with bodypainting exhibits and demonstrations in the Main Exhibitor Area. 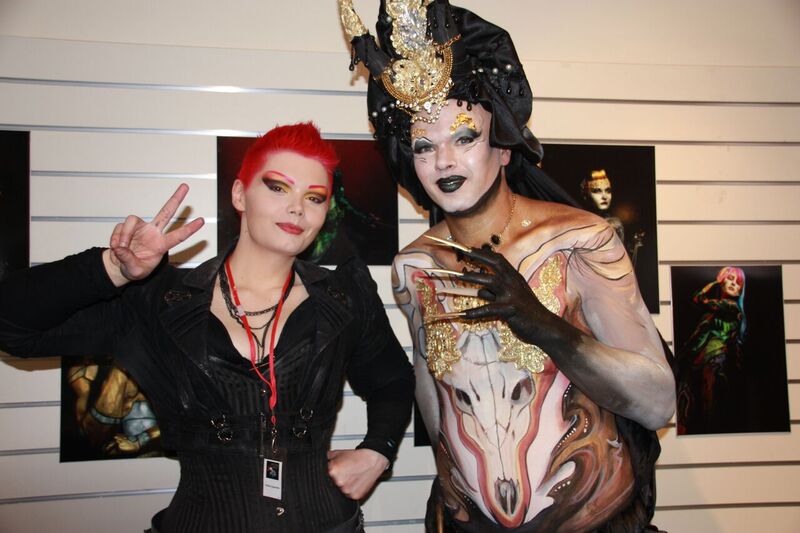 One of the highlights of the day was the brainchild of Angela Youngs of Ipaintfaces.  The ever-creative Angela outdid herself with a huge collaborative piece of Animated Art. She recruited a team of artists – Helen Eyre, Alison Bessant, Sally Reeves and Cheryl Howes – and together they completed six bodypaints.  The collection of bodyart was based around the character Angela designed and painted on her husband Daniel Kerry, the poster-boy for the event; you will have seen his face peering out from all of the promotional material leading up to the Event, he’s the one with the bulging eye, bright red hair and a look of a mad scientist about him.  Angela is fascinated by the macabre and loves the idea of combining bodyart with performance.  The team of models were given character names which they each embodied with their movements and persona as they were set free to roam the event as a pack.  The Marrionettist, Stretch, Dark One, Flex, Dollface and Giggles did their painters proud as they stole the show as a red and black ensemble of artistic expression. 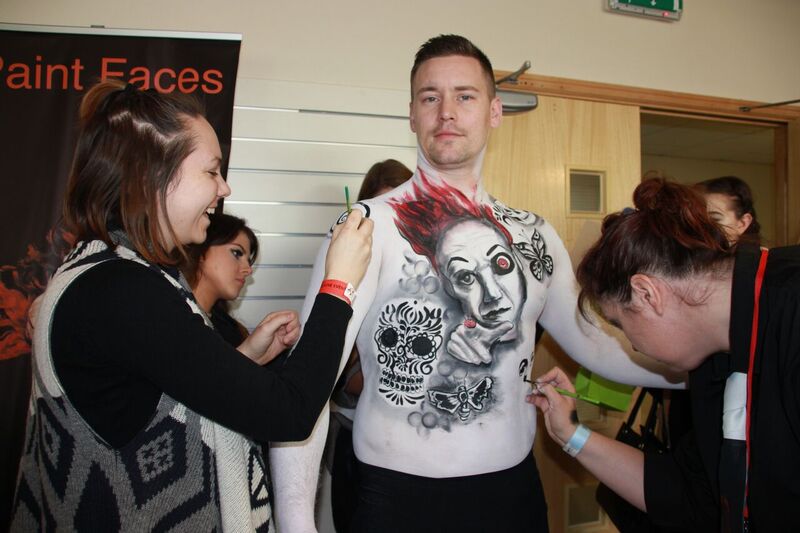 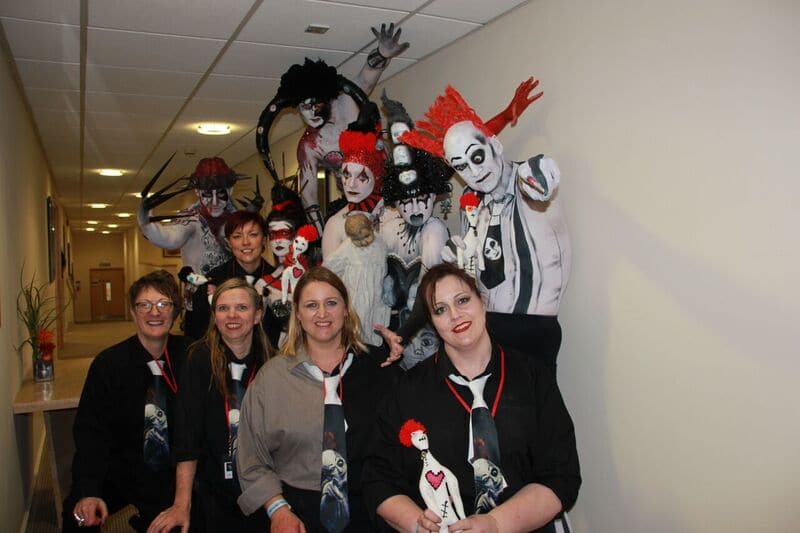 In the Creative Artist Area I met some inspirational people.  I was blown away by Joe Whiteman who brought with him a life-size model of the Predator which had been two years in the making.  Joe is a tree surgeon by day and master craftsman by night, and my first thought when I saw his model at the make-up show was to assume that it was an exhibit of one of the costumes from the film.  I couldn’t believe my ears when Joe informed me that he’d spent an hour a night in his living room making Predator using mostly card, wood, paper and paint for a total cost of £80!  Even on close inspection this model was seriously impressive.  Joe also brought along a current work-in-progress, a Medusa which was equally astounding.  Incredible ingenuity, patience and passion were evident in Joe’s work. 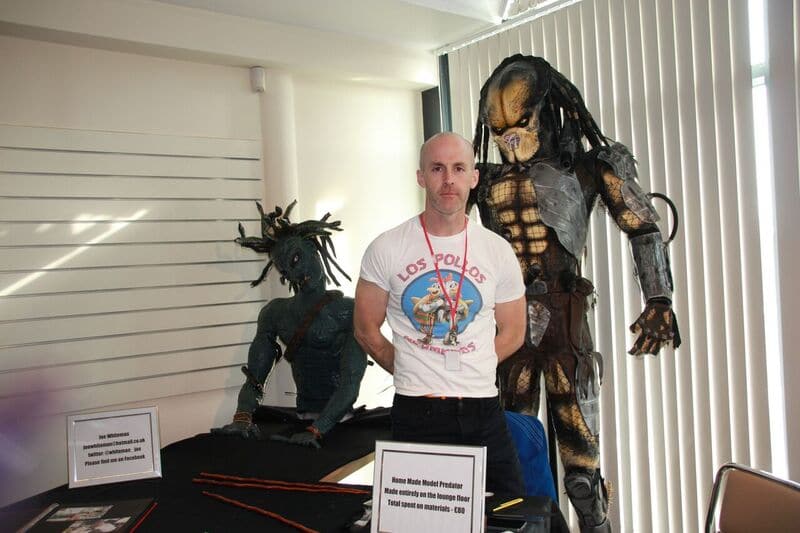 Another fascinating exhibitor was Paul Wilkins of DDFX, he brought with him several examples of his handiwork, most of which were made on a shoestring budget but which held their own amongst the higher-end silicone pieces on display at the event.  Paul talked me through his process of making a skull out of a plastic milk carton using a heat gun, and his realistic decomposed severed head made from a polystyrene head covered with latex, tissue and cotton.  The eyes in his models were particularly effective, made from marbles which were painted and then coated in resin to give them a cloudy appearance.

Watching SFX make-up Artist Steven Harris apply encapsulated silicone prosthetics to himself was a pure delight.  I chatted to him whilst he worked and he showed me some of his animatronic creations, an area in which he is specialised in.  This friendly, mild mannered chap turned into a beast before my eyes, finishing his character with costume and contact lenses to render himself unrecognisable. 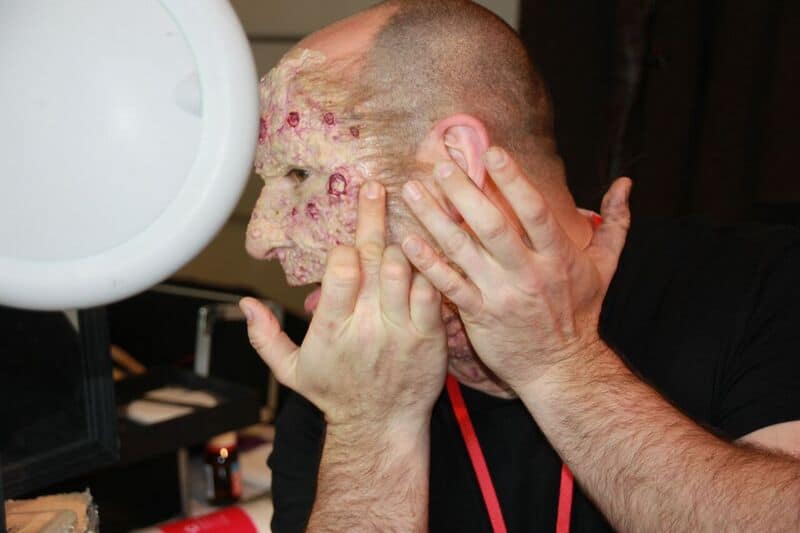 There were a wide range of hands-on workshops throughout the day which were well attended.  Andy Savage’s “Out of the kit make-up FX” workshop was so popular that he ran two of them, the second of which was standing room only.  He expertly demonstrated a large gash on fellow MUA Laura Odette Phipps, who became more and more squeamish as the wound on her arm came to life as the finishing touches were added.  Andy showed the class how to use Sculpt Gel to create realistic looking wounds before participants practiced their new skill under his guidance. 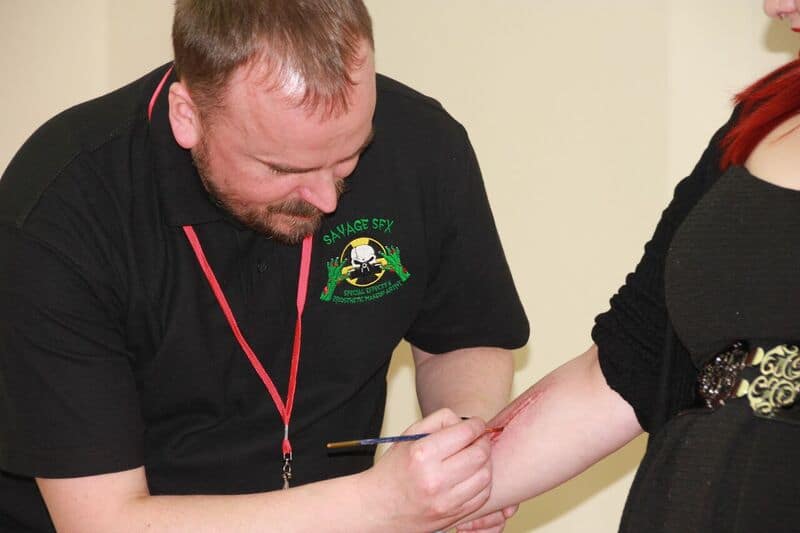 There truly was something for everyone.  Elissa Barrett ran a workshop in One Stroke Painting, there was a bodypainting workshop from Paintopia, and a 1940’s hair styling workshop by Veronica McAleer to name a few. 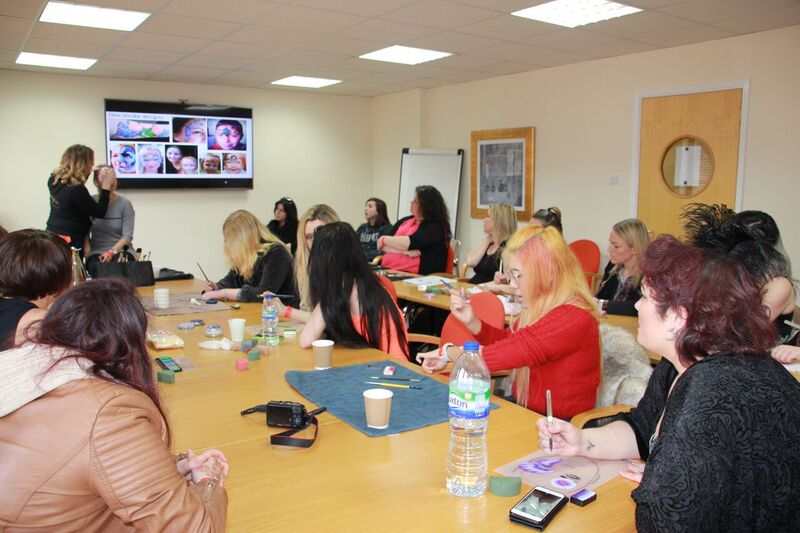 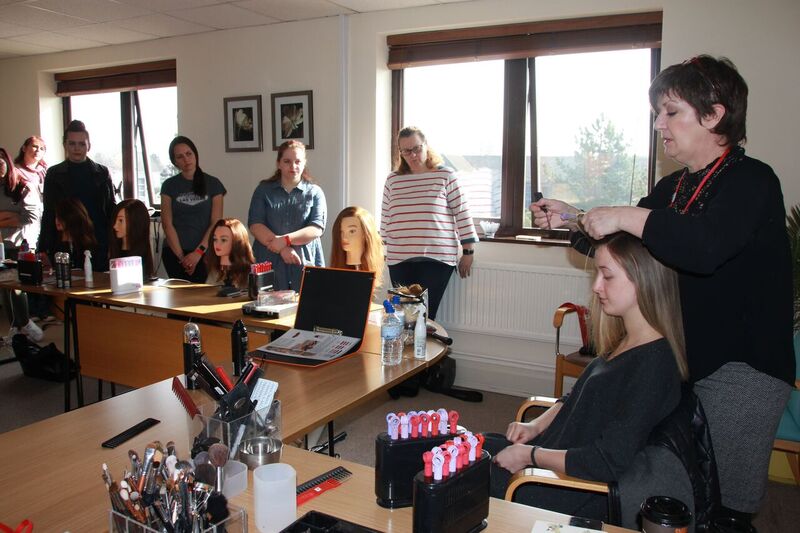 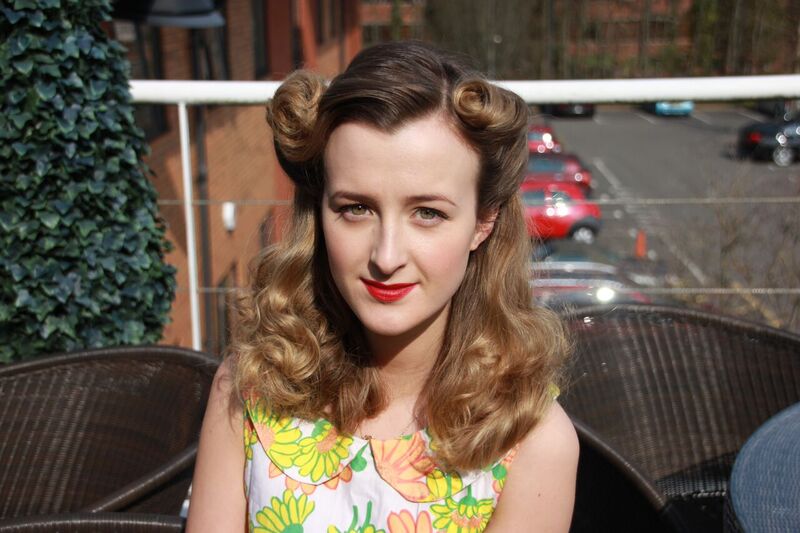 The end of the show saw the parade of students who had been working all day in the Student Competition, organised by Ann-Marie Mays.  Judges Steve Thewis, Veronica McAleer and Angela Youngs really had their work cut out for them thanks to the high standard of work from these budding make-up artists.

I caught up with a weary but cheery Martina at the end of the show – she was already making plans for next year.  This event has made a strong debut and is sure to grow year on year.  We wish Martina and her team every success and praise them on a job well done! 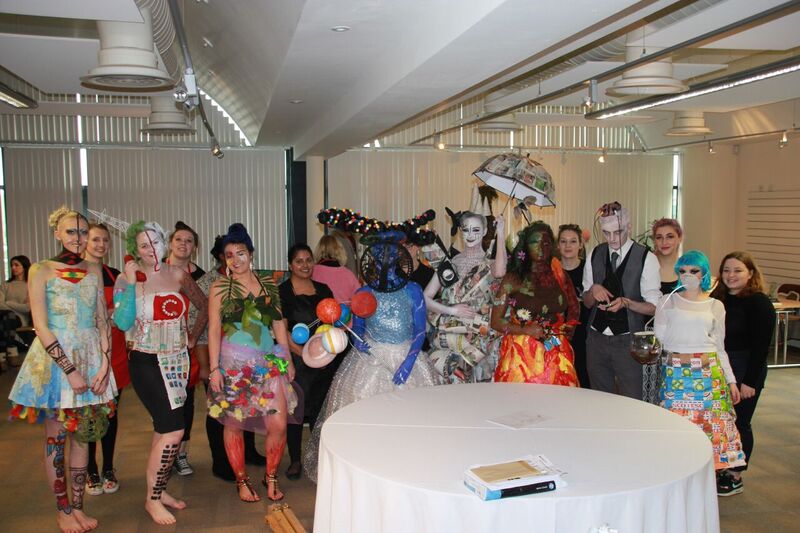 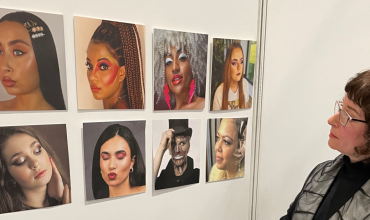