You might have seen on social media last week that we were invited behind the scenes for a very exciting event with the talented Armand Beasley.  As the Head Judge for our Real Beauty competition category, he has a particular talent in making women look beautiful without his make-up appearing at all heavy or mask-like.  But we were not alone – in the beautiful lobby of The Landmark Hotel in London we met with Anne-Marie Doonaught-Singh, the winner of Warpaint Magazine’s Real Beauty category at Professional Beauty London 2015.  She had been invited to work as Armand’s assistant for the day as part of her prize for winning the category.  Excitedly clutching her carefully packed kit, Anne-Marie had no idea what the day would have in store for her.  Here’s what happened… 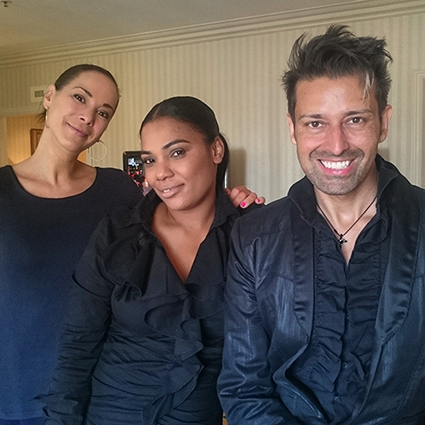 In the sun-drenched Winter Garden of the Landmark Hotel, we meet with Armand and Lisa Izquierdo, another member of the make-up team.  While we waited for Armand and Lisa to arrive, we had the chance to chat with Anne-Marie and learn a bit more about her and her make-up journey. 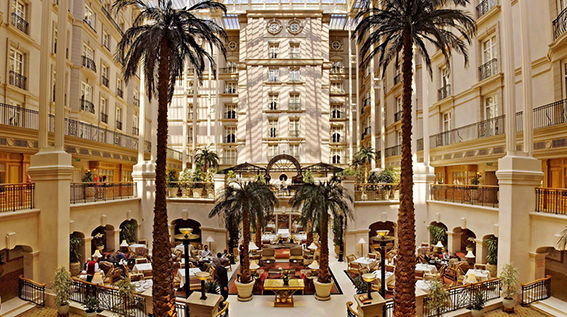 “Honestly, it doesn’t matter how pretty, how perfect you are – make-up can bring beauty out of anyone.  It can transform you, and make you feel like a million dollars,” she told us, when asked what it is she loves about make-up.  “It’s the thing I’ve always, always had a lot of passion for.”  We were stunned to hear that this has been her first year in training, and that she’d won her category in February after only beginning at Lambeth College last autumn.  “Before I started, I couldn’t even do a smoky eye.  Not properly.  I learnt a lot from watching YouTube, there are so many amazing tutorials.  I learnt all about brushes on there, about the different brands and how much of a difference they can make.”  Always looking to switch things up and try new things, she laughed as she lamented how she sometimes forgets which tutorial she used to create a look.

When asked what she was hoping to take away from the event, or what she might be challenged by, she immediately replied with, “Timing; it’s my biggest problem!  When I first started, I would take two hours to do my make-up – my own make-up!  I’ve cut down, I can do it quicker now, but I know that’ll be my biggest thing.”

Talk turned to the Warpaint Competition at Professional Beauty this year.  “Let me tell you, I never expected to win!” she exclaimed.  “My tutor was confident, but I wasn’t!”  Her winning look was inspired to empower and give confidence to the wearer, ideal for a job interview or event.  “I had to practice a couple of times, as my model had hooded eyes,” she told us.  “I got it right on the third try.  And she had such thick eyebrows – I tried brow powder, because that’s what I use myself, but it didn’t work, it wouldn’t sit right.  So I switched it up and used MAC’s Spike pencil, and that worked.  I think that’s such a good piece of advice – that if something’s not working, to not force it.  Switch it up, try something else instead.”

And would she enter the competitions again?  “Definitely!”

We sat down with Armand and Lisa for a quick cup of tea as they informed Anne-Marie about the afternoon ahead.  She was to assist Armand and Lisa with creating the looks for some of the cast of Downton Abbey for the 2015 Downton Abbey Gala Dinner, an annual event to raise funds for a selected charity.  This year’s event was held to honour Great Britain’s team for the Special Olympics, which helps to transform the lives of children and adults with intellectual disabilities through sport.  As an ambassador of the charity and gala attendee himself, Armand was only too happy to get involved.  The afternoon’s schedule was packed, with a half a dozen or so cast members to make up over the course of the afternoon, but he was determined to make sure that Anne-Marie’s experience was as hands-on as possible. 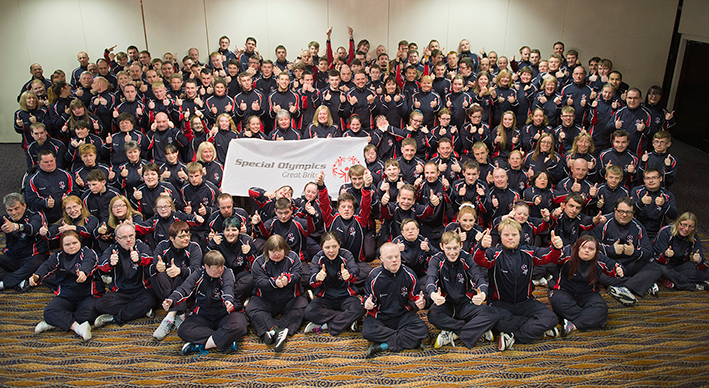 “Doing someone’s make-up is such an intimate thing for them,” he told us.  “Especially for mature actresses.  They come in, totally bare, and it’s our job to make them feel as comfortable and relaxed as possible.  With celebrities you need to be extra flexible, since they might need to be called out for sound-bites or meetings – but it’s ultimately your job to make sure they don’t leave your chair without looking their best.”

Armand’s involvement with the Special Olympics spans a decade, and there was a deep-rooted passion for the charity running through everything he did that day.  “I got involved with Special Olympics when I attended a charity dinner about 10 years ago,” he told us.  “I chatted with a couple of the athletes and was smitten.  I know that having a make-up artist as an ambassador for a sporting charity is quite unusual, but hopefully I can help reach a different demographic with the TV makeover shows that I do and the people that I know.”  The Special Olympics is being held in Los Angeles this July, with Michelle Obama recently confirmed as attending the opening ceremony on July 25th.

Armand and Lisa took some time to fill Anne-Marie in about the structure of the day, and what they would need her help for – from quick client consultations to sanitising products as they worked.  “It’s always a good idea to sharpen pencils and quickly clean brushes in front of your clients,” he advised.  “It’s reassuring for them.  I like the Bobbi Brown spray and Burt’s Bees wipes for a quick clean, then you can give them a thorough, deep clean at the end of the day.  I’m pretty obsessed with hygiene when I’m working, but at the end of the day you have to be practical.”

With our suites finally ready, we met with the hair team – Jo Irving of Lovehair & Co., Harriet Hamilton, Amanda Oliver and young Adam, a hair prodigy at just 12 years old who was there to assist and observe.  The teams began assembling their arsenal of tools, with Anne-Marie washing Armand’s brushes and helping to arrange his products, ready for the first client.  Products were laid out across various surfaces, in order of application.  From Sisley moisturiser and foundation to Urban Decay’s All Nighter Setting Spray, Armand, Lisa and Anne-Marie were all set to create glamourous red carpet looks for  the actresses. 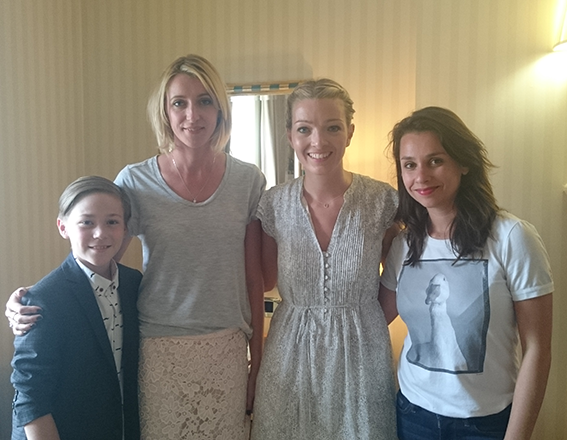 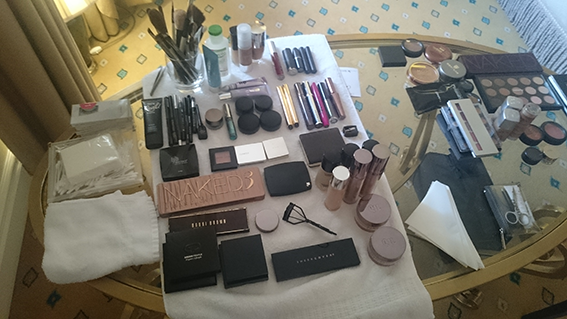 Some of Lisa and Anne-Marie’s kits 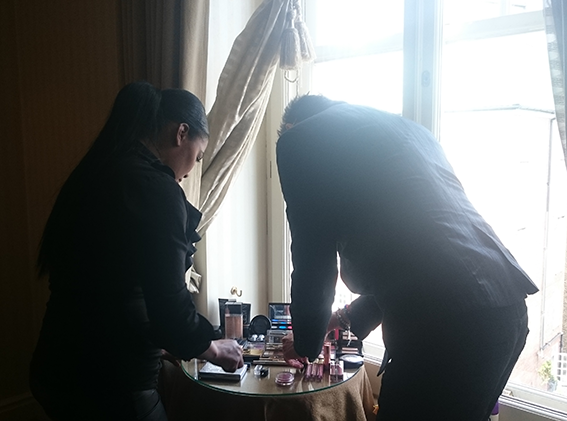 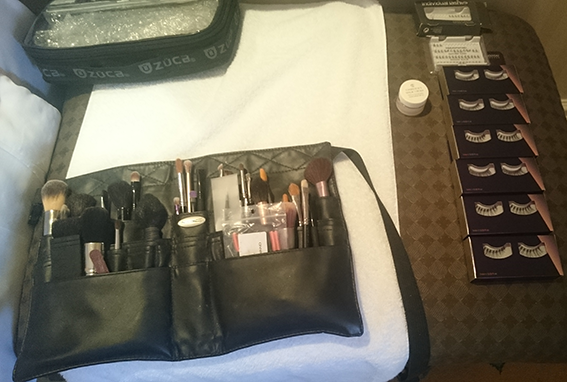 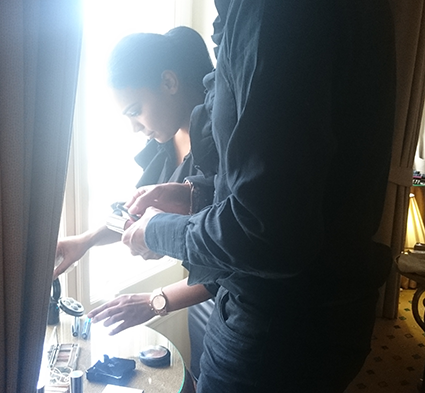 Joanne Froggatt was the first actress to appear with a tentative knock, before taking a seat in front of the tall window.  Her consultation revealed that she likes to play up her eyes, so to pair with her pale gold satin dress Armand created a smoky, copper-tinged eye look with a nude lip and glowing skin.  After that, the stars made a steady stream through the doors, with Sophie McShera treated to peachy tones and a bright, classic winged eye and Michael Fox appearing to have his hair styled. 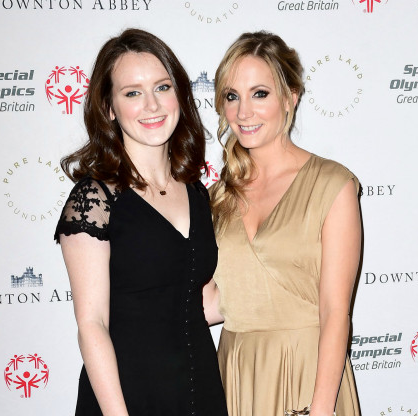 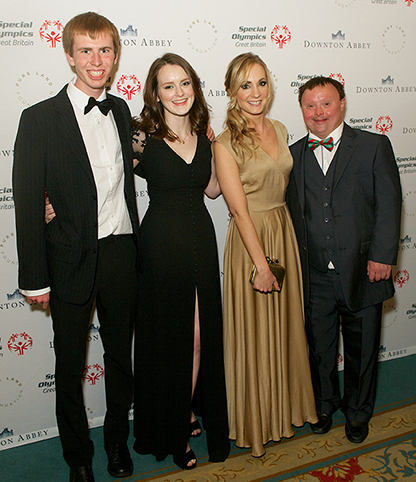 With only an hour until dinner, the pace picked up considerably.  Phyllis Logan and Lesley Nicol had their time in the chair, both with dark eyes and rouged lips.  Raquel Cassidy was coaxed into wearing a darker lip shade, and was stunned by the end result – “I don’t think I’ve ever looked so good!” she exclaimed, clutching the NARS lip pencil gifted to her by Armand.  With only fifteen minutes before the start of dinner, Anne-Marie got her first taste of a real backstage rush as both hair and make-up worked simultaneously on Samantha Bond.  By the time she was all set, her thick hair was beautifully blown and a daring red lip lifted her complexion, blue eyes bright against the smoky brown tones which framed them. 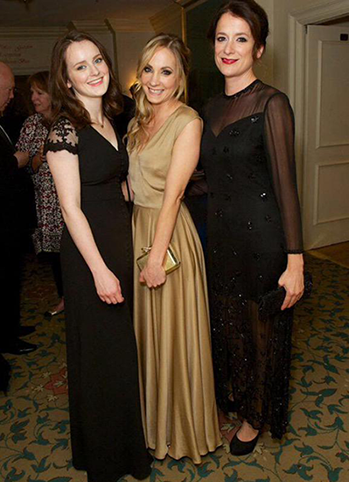 “Armand is a true artist,” Anne-Marie marvelled to us as we packed up that evening.  “He’s so precise, and he knew just what to do.  They all looked stunning.  They looked beautiful, but without ever looking masked.  I want to do more looks like that!”

If you’d like to win an incredible experience prize like Anne-Marie, check out our upcoming competitions at Professional Beauty shows across the UK and Ireland.  Full details on how to enter can be found here (Manchester) and here (Dublin).

Click here to read about our London 2015 show from earlier this year. 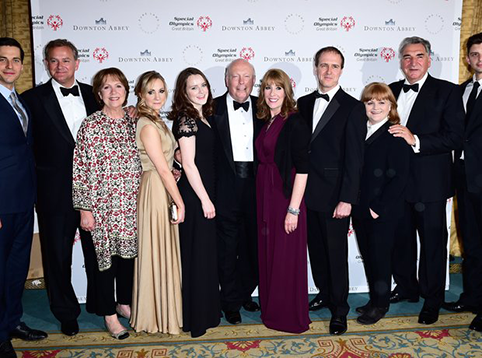 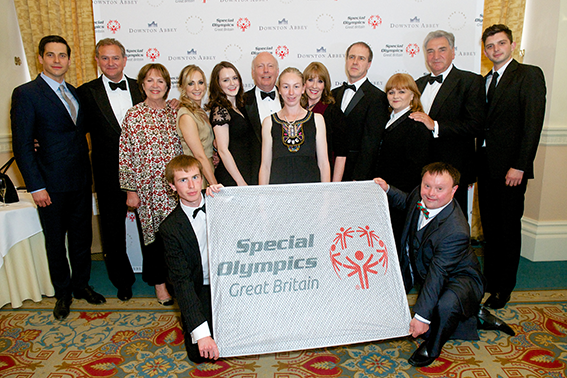 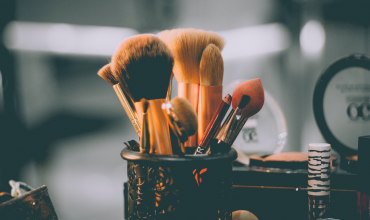 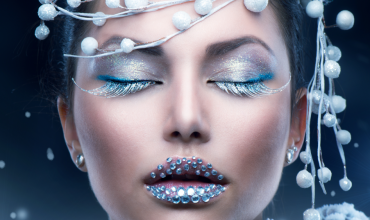