It’s that time of year again;  nominations are coming thick and fast for the Hollywood Award Season of 2015, and this weekend it all kicks off with the Golden Globes.  The recent announcement of the seven films which have made the finals for the Academy Awards proved to be an interesting mix in their degrees of subtlety and genre.  As they make their final pitch to the judges, Warpaint have the run-down of the films, and exclusive quotes from some of the nominees who might follow in Robin Mathew‘s footsteps come February. 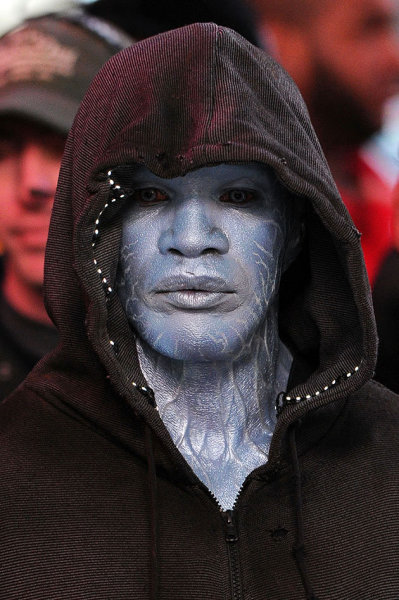 Anyone who saw the early shots of Jamie Foxx in the make-up for his character Electro knew that this work was something special. Sarah and Howard elevated these comic-book characters thanks to some truly detailed make-up work.  The multi-layered prosthetic for Foxx has some great, intricate details, which was then enhanced in post-production to give the impression of electricity running beneath the skin.  The result was a truly impressive villain. 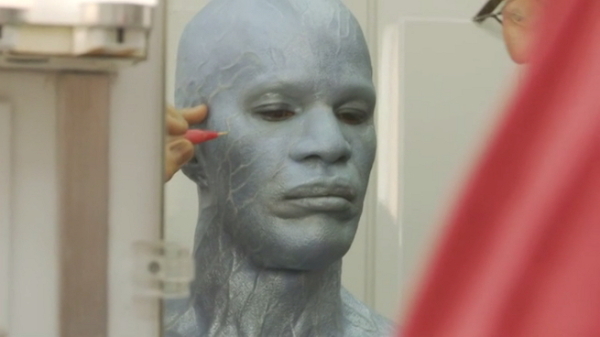 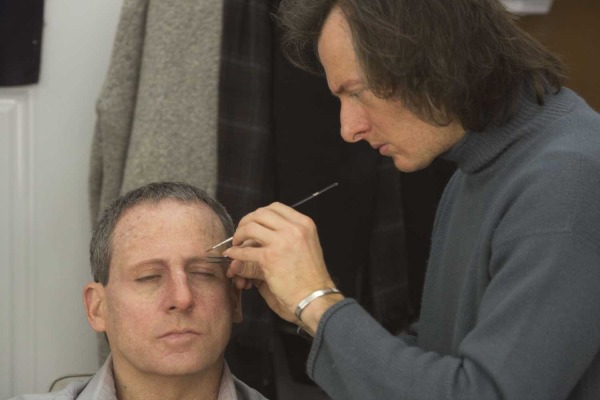 It requires a double-take to recognise comedian Steve Carell beneath the layers of make-up and prosthetics in this tense wrestling flick.  Playing real-life coach John du Pont, Bill and Dennis had the difficult task of transforming Carrell and the other characters (Channing Tatum and Mark Ruffalo) into other real-life people, as well as affording a believability and flexibility to their work which would allow for their (often arduous) physical performance.  Carell has credited the make-up for helping him to really inhabit the character, in a way which he was not anticipating. 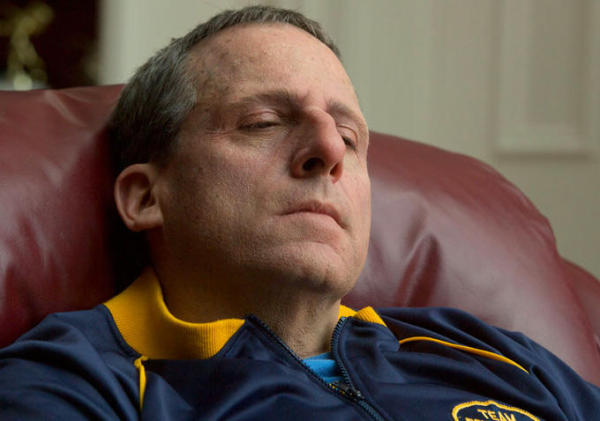 Bill Corso spoke to us about the experience, saying “It was a true gift to be able to work with Bennett Miller and this great group of actors  on this special film.  It’s always a challenge to do very realistic work, but especially when the success of the film hinges on the fact that the viewer believes he’s watching these ‘real’ characters and not just ‘actors in make-up.’”  He added that “It’s rare that a project will require you to take a well know actor(s) and render them unrecognisable, and in the most sensitive and realistic of settings.  That’s quite the challenge.”

“It’s always special to have a project you’ve put so much effort into be recognized, not only as a film with all it’s merits, but that your work in particular is recognized as being a valued part of that achievement,”  Corso told us, when asked about how it feels to be nominated for such an award.  “In a year showcasing some incredible makeup/hair films, being selected by your peers as outstanding is the greatest compliment.” 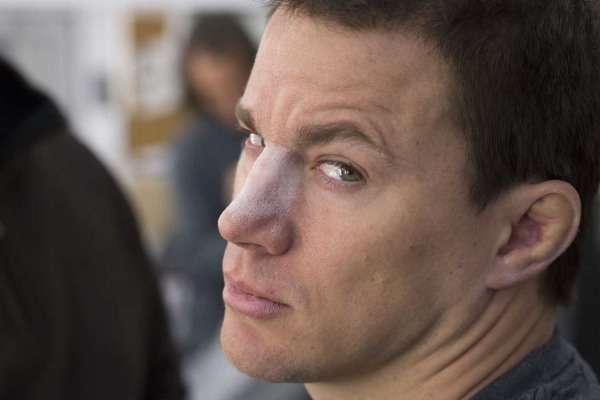 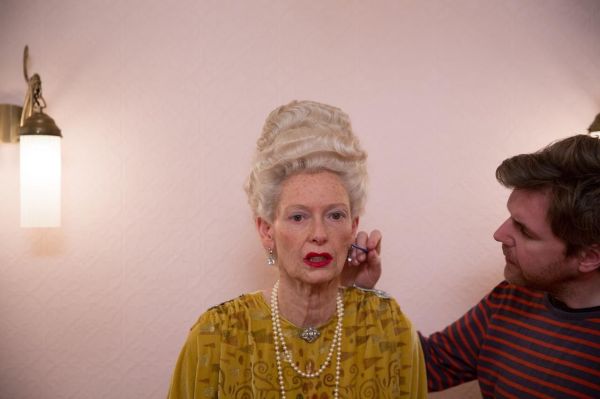 Quirky and colourful, The Grand Budapest Hotel twists and turns with comedy capers, but remains credible and believable very much thanks to the characters.  From the incredible, completely transformative ageing make-up of Tilda Swinton – one of our favourite aging make-ups – which took a laborious five hours to apply, to the wigs, moustaches and character looks for the enormous cast, Mark and Frances had quite the job on their hands!  Their nomination is a testament to their care and attention to detail which helped to breathe life into these comedic figures. 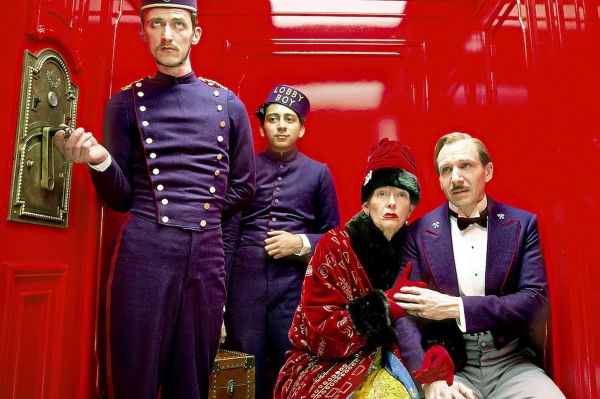 Guardians of the Galaxy – Lizzie Yianni-Georgiou and David White 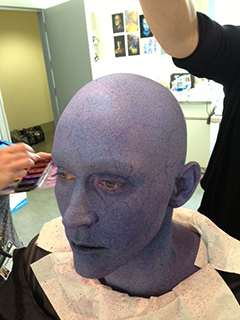 With Guardians, Lizzie and David had to populate an entire world with believable alien characters.  Full-body painting, tattooed markings and shaved heads – nothing was out of reach, which Lizzie shared with us in her interview last summer.  Even painting someone (namely actress Zoe Saldana) a vivid shade of green was no mean feat either, requiring multiple tests to find a distinct shade of green which both looked believable and worked well with the camera. 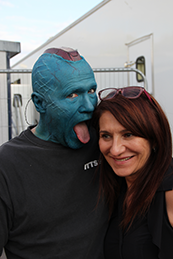 Michael Rooker as Yondu, with Lizzie

With the back catalogue of Marvel to plunder for inspiration, the team had a lot of resources to work with, as well as some engaging and supportive actors to bring their vision to life:  “All of the actors were involved in their final looks, but two that stood out for me were Benicio Del Toro [the mysterious Collector] and Lee Pace.  Lee [who plays Ronan the Accuser, the film’s villain] was very involved in his character’s development we had to bald cap him and then apply layer upon layer textured products and specially developed tribal markings, which was quite an endurance test.  Both gentlemen were a real pleasure to work with.” 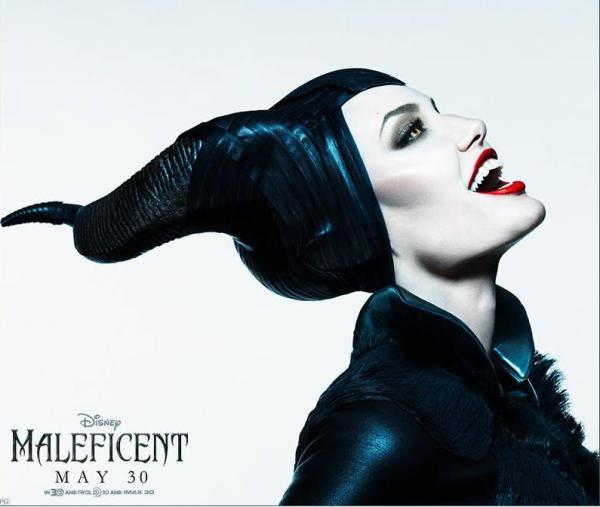 With subtle but beautifully-designed adjustments to Angelina’s ears, nose, teeth and cheekbones, the team managed to conjure the animated villain into real life.  Their aim was to make her appear real, not creature-like, Baker explained.  They began with the horns and her pointed ears, and it was Angelina herself who pushed them to take the look further with prosthetics, making her very sharp and angular to convey her character.  We absolutely loved the final look, even featuring it in our Twisted Sistas round-up. 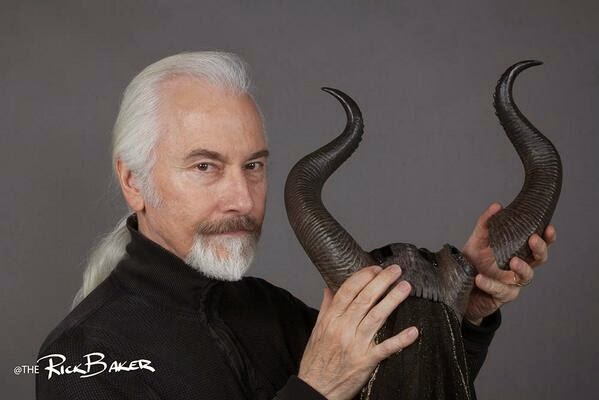 Tuiten told us that  “It was one of the hardest make-ups to pull off, as it really is a beauty make-up with silicone prosthetics that had to be flawless.  Rick designed the make-up beautifully, and I was honoured to work with him and Toni G.”  An extra touch of the extraordinary came from the contact lenses, which were designed to look like goat’s eyes, as they have horizontal pupils rather than vertical ones.  This tiny addition showcases the subtleties of the look, which really was a fantastic example of make-up artistry. 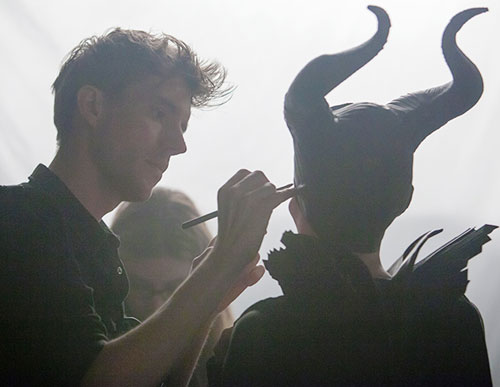 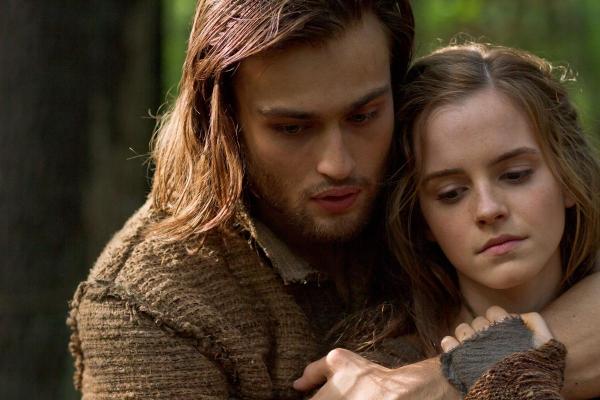 With this film, Judy and her team worked hard to create the most natural, untouched looks from the list.  This biblical epic called for a somewhat unkempt look, a million miles away from the precision of many of the other contenders.  But as we all know, sometimes paring things down can be as difficult as pushing the boundaries, and with the battle sequences and abundance of water the looks had to withstand, this may be the dark horse of this year. 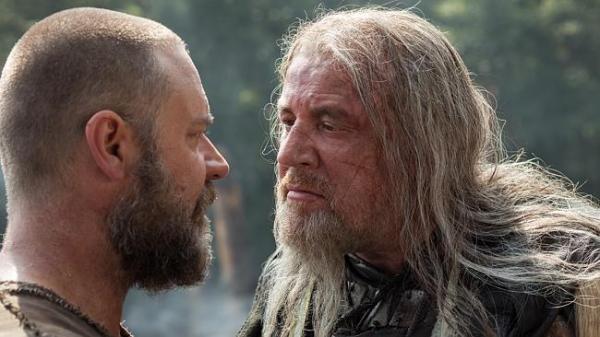 “The film was a huge endeavour but so rewarding to be have been a part of,” Jerry Popolis told us.  “If it was not for the hard work of my team Christine Harlan, Jasen Sica, Áslaug Dröfn Sigurðardóttir and all the local 798 hair and make-up artists that worked in the mud and rain doing hundreds of extras every day, I could not have done it.  Working on Noah was a dream job – we shot in Iceland, which was amazing, and of course in New York which is home for me.  Being allowed to be so creative and trusted by your actors is what it is all about, it makes you push for perfection.” 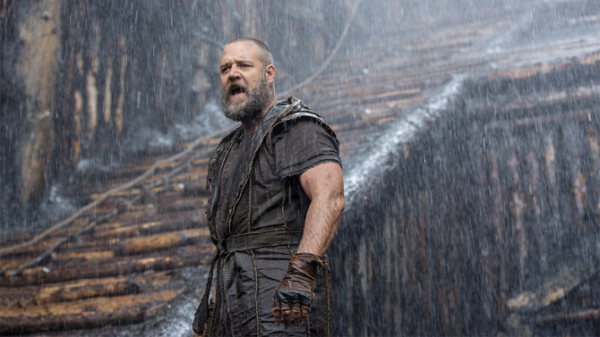 The Theory of Everything – Jan Sewell and Kristyan Mallett 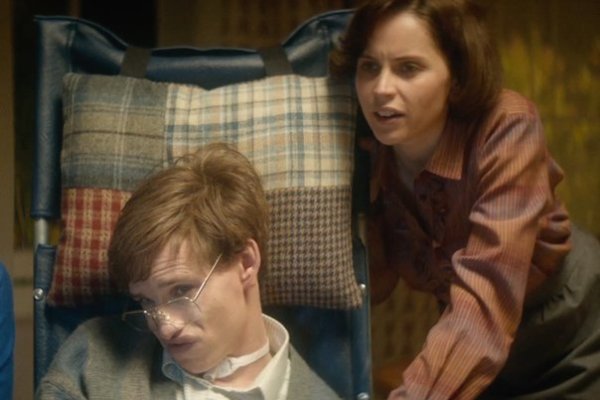 Jan was, naturally, thrilled to receive recognition of the challenges they faced.  “We’re so delighted to have been short-listed by the Academy. Theory was an amazing film to be part of… and to work closely with a talent like Eddie Redmayne, so lucky!”  Kristyan echoed her acknowledgement of Redmayne’s talent in portraying Steven Hawking in his interview with us, but the Academy has rightly honoured the help they gave him in his biggest role to date. 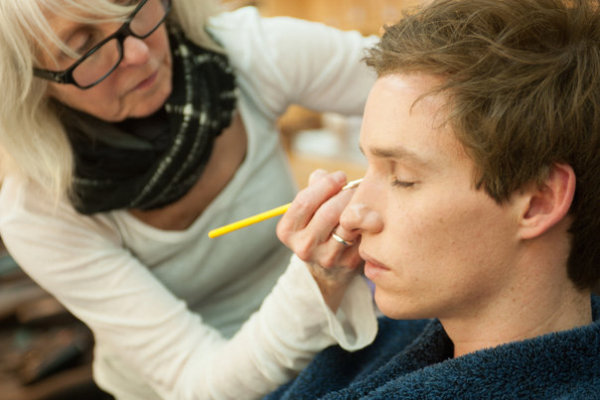 Their magic is in the subtlety of the joint prosthetics to give Hawking’s crooked posture, the beautiful period make-up, the cuts and injuries which plague him as his condition worsens.  “Everyone knows what Stephen Hawking looks like, and we definitely didn’t want to offend or mock anyone.  It was all very subtle work,” Kristyan told us, describing the shoulder and knee prosthetic pieces they added.  “You never saw them, but it made the costume hang differently, made it look like his legs were more protruding, bonier.  There was a piece for the back of the head too, under the wig, for the same sort of thing.  It was just looking at how we could convince people that he was Hawking – we were incredibly lucky to have someone like Eddie.” 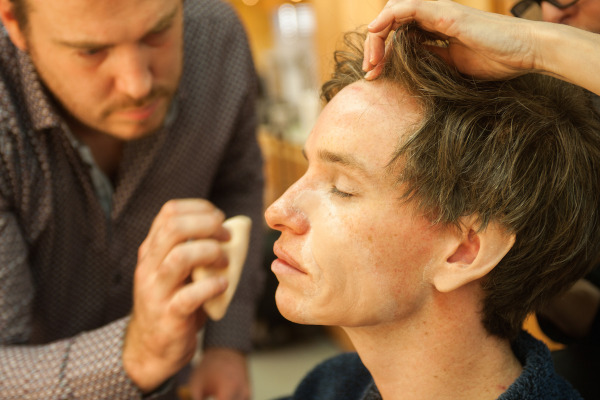 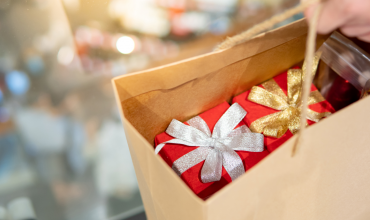 Retailing – for life, not just for Christmas 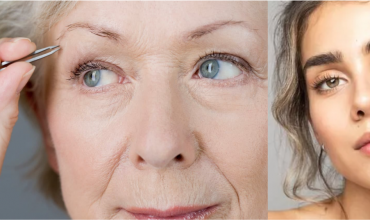 Bold And Beautiful Brows At Any Age