Pushing the boundaries is what make-up artists delight in, which is why we love seeing the out-of-the-box looks which grace the catwalks.  Haute Couture Week is a nice reminder of the trends of the upcoming season, as well as providing their own dose of inspiration.  Warpaint selects five of our favourite looks and delves into the details of how they came about.

Blink and you’d miss it; this look was subtly striking and a fresh twist on the metallic trend which we saw all over the A/W14 catwalks back in January.  Barely-there, beautifully natural faces were lifted with the discreet flash of silver on the eyelid.  Left undecorated with mascara or other liner, the silver made the whites of the eyes pop, and added to the healthy glow Philips created on the girls’ faces using Diorskin Star Fluid Foundation (available September 2014). 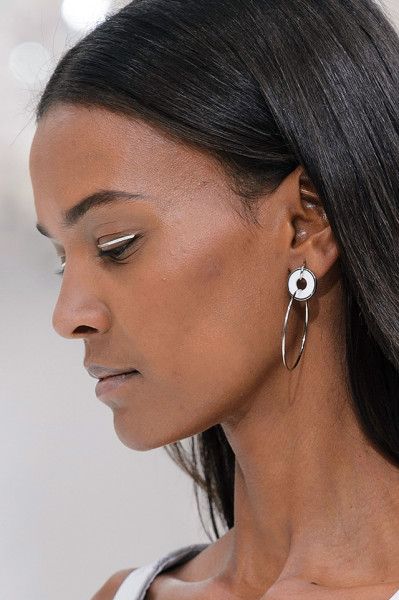 Eschewing the traditional pencil or liquid liner, the artificial adhesive line was affixed to the eyelids, which was what made it noticeable and elevated it to something modern, something fresh.  Created in osmosis with a collection that combines a touch of history with a futuristic ambience, the make-up continued the same idea of interaction between these two worlds.  “I was directly inspired by the spirit of this collection, which plays on the contrast between classicism and a visionary imagination,” Philips explained. 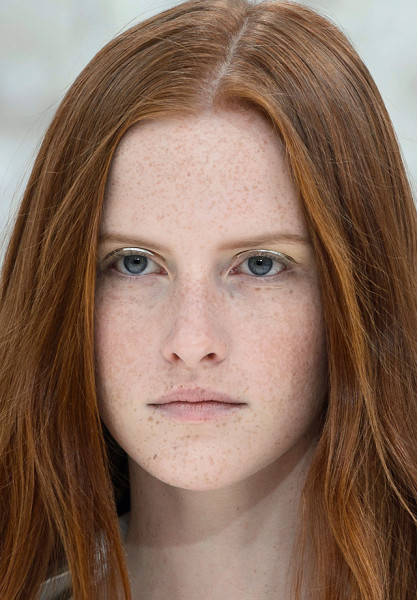 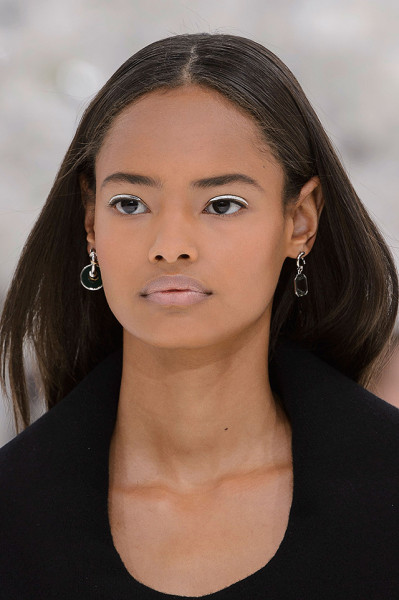 McGrath worked her cat-eye magic once more at Versace with this stunning dual-toned dramatic look.  Described as “pretty with a hint of punk”, this fresh take used two teal tones, curving from the very inner corner right out to the brow.  Keeping the rest of the face natural, yet subtly groomed, those gorgeous blue tones and thick fake lashes kept our attention firmly on the eyes. 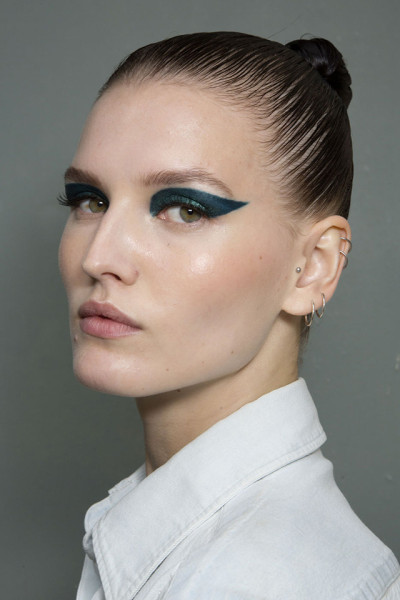 Lower lashes were left bare, with a hint of pale liner in the waterline to further enhance the whitening jewel tones above.  Donatella herself helped to shape the look, with McGrath reporting, “she said, ‘I’d love something really graphic, aerodynamic and also something fun.’” 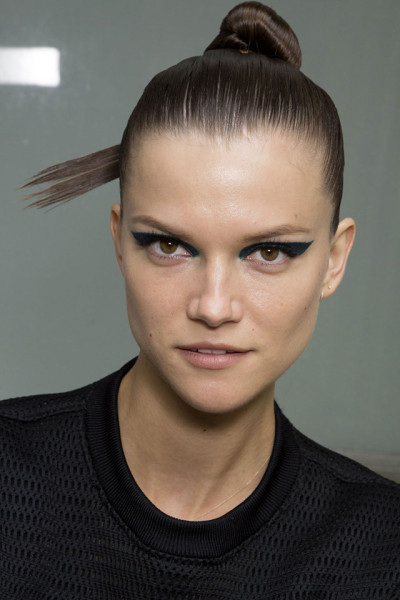 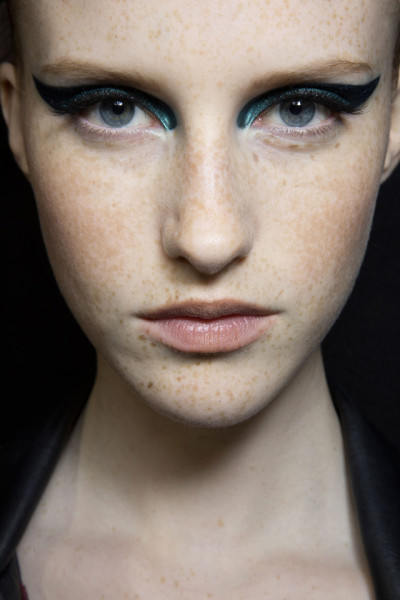 Between the ultra-feminine clothes which came down the runway and the ‘80s Boyband hair, the make-up could have gone either way.  The result was a mixture of the two – glowing, pearlescent skin and feminine, metallic cat eye-flicks, combined with bold brows and a tail end of matching black at the end of the cat-eye.  A subtle beige shadow covered the entire lid, up to the brow bone, to unify everything and make the metallics shine out.  Chanel’s newest foundation, Perfection Lumière Velvet, was the star of the show, giving the most beautiful finish to the skin. 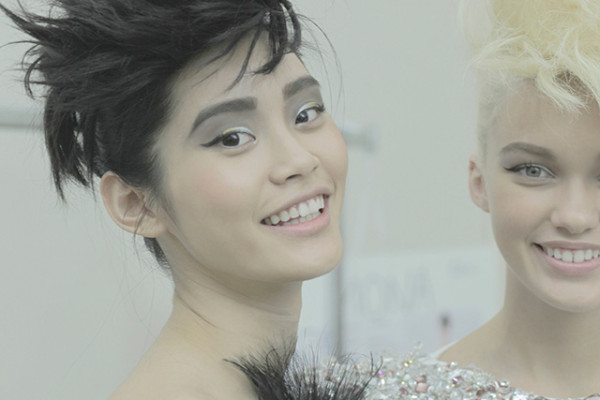 Lagerfeld made it known that the collection was, in part, inspired by Le Corbusier, with the black wings at the end of the liner mirrored the arches of the created apartment setting beneath the dark girders of the Grand Palais’ roof above.  The silver and gold tones matched the embroidery glistening on the garments below, using Illusion D’Ombre in “Fantasme” and “Vision” respectively. 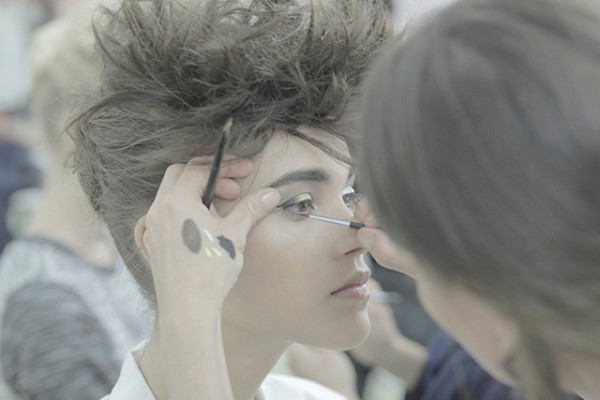 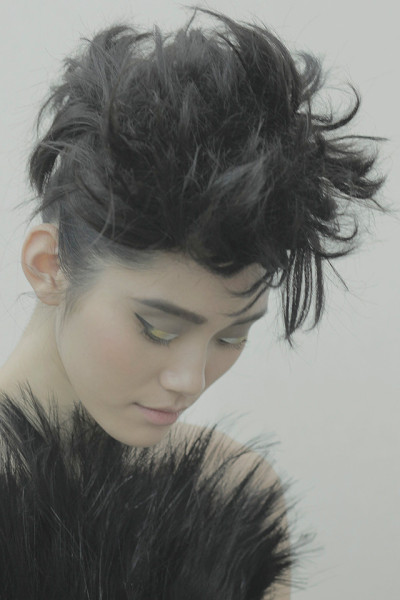 Monochrome was the name of the game at Armani, with the stark contrast of colours reflected in the make-up.  The models bore a base a shade or two lighter than their natural tone, with illuminator lighting the highpoints of the face further. 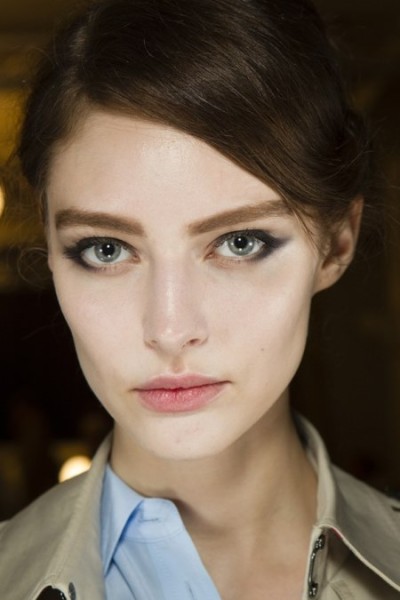 Using Armani’s new Eye and Brow Maestro (available early September), a soft smoky eye stretched across the top lid and halfway along the lower lashline out into a feline shape.  Eyebrows were then groomed and accentuated using the same product.  The effect was stark and bold, a modern woman. 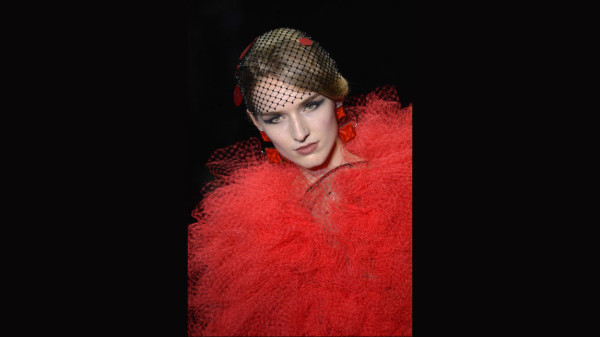 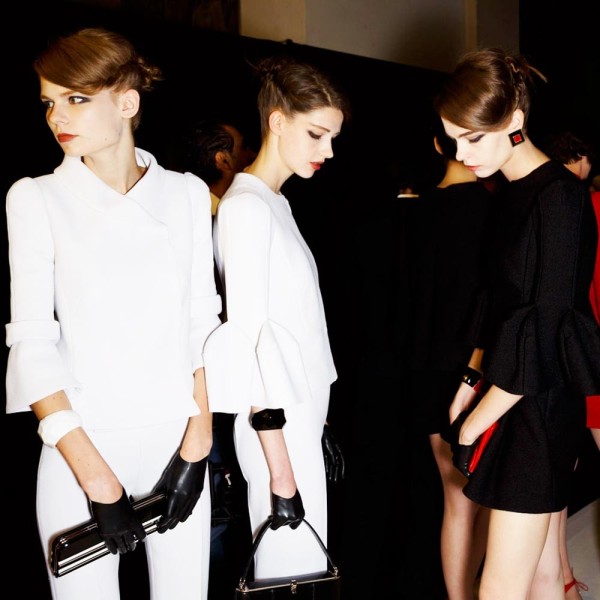 With the stunning embellished dresses as inspiration, Pecheux created a glimmering seafoam eye using MAC products to accompany them.  The subtle silvery-blue shade was toned down enough to suit the variety of colours in the clothes themselves, while the shimmer tied in to the glowing, ethereal effect. 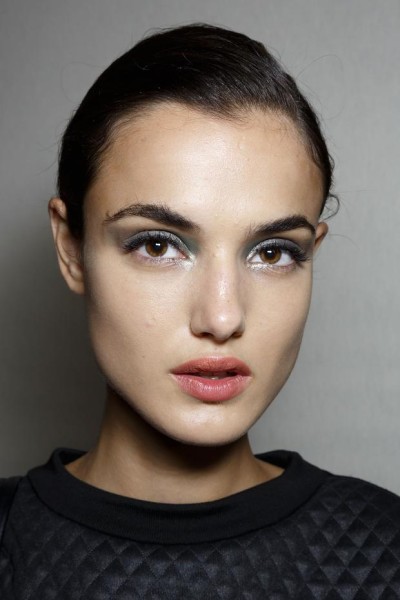 Completing the look, a soft pale coral was pressed onto the lips with fingers.  This semi-matte effect was natural and pretty, with no harsh lines to disrupt the delicacy of the look as a whole. 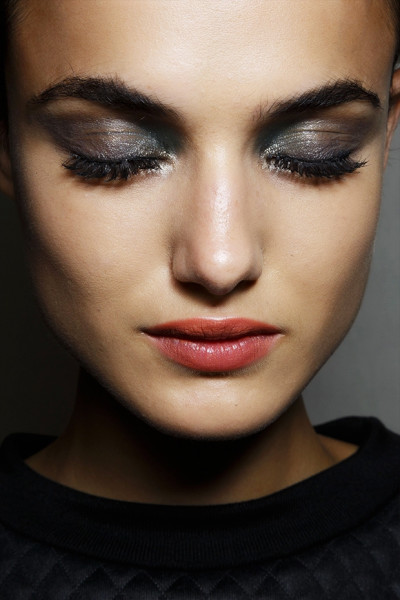 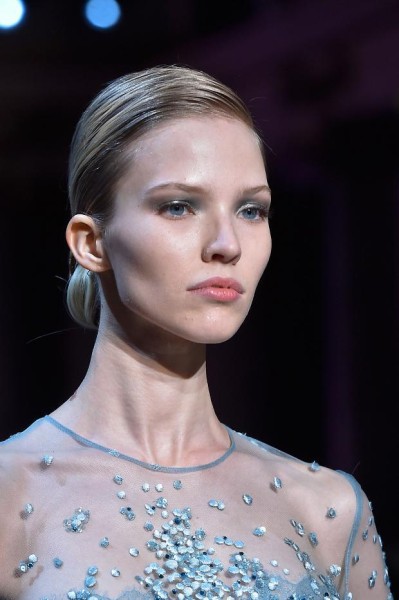 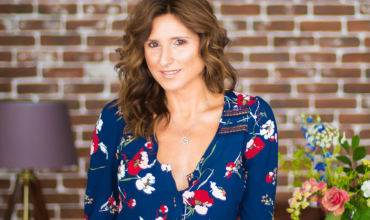 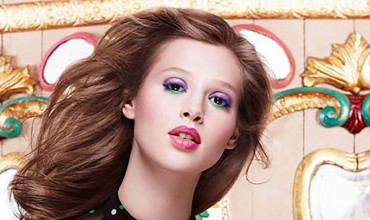