After a three year run on Broadway, Urinetown, the surprising hit musical set in a dystopian future, when years of drought have lead to the banning of private toilet facilities hit the west End in March. Gemma Flaherty was given the steep task of recreating drain dwellers and projecting the filth and desperation of the cast via the hair and make up. Warpaint takes a trip down the drains to meet her. 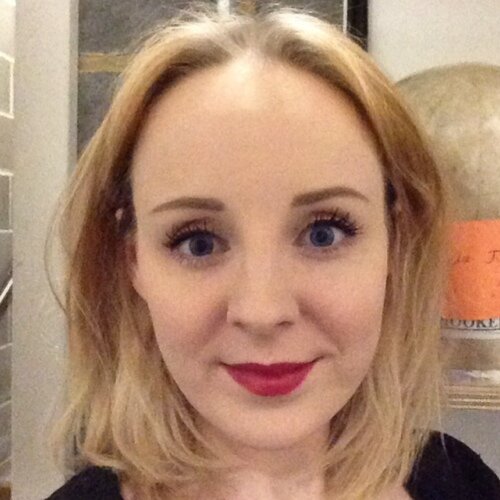 WP: How did you get into the make-up and hair business? Did you undergo any formal training? If so, where?

GF: I decided when I was at school that I wanted to work as a make up artist after reading an interview with Caroline Barnes – who, at the time, was working with Kylie.  I loved the idea of doing a job where you could enhance someone’s beauty one day, and then the next day, turn someone else into something hideous.  When the time came to apply for colleges I knew that I wanted to go the London College of Fashion.  Thankfully I was lucky enough to be accepted.  It was like a dream come true.  I went from living in a small town in Central Scotland to living in London, and going to college on Oxford Street every day.  I graduated in 2004 and have been very lucky to have had continuous work in the hair and make up industry ever since.

WP: What attracted you to theatre, over other mediums?

GF: I first got into theatre after doing work experience at Richard Mawbey’s wig company, Wig Specialities, as part of my college course.  Whilst there, I was very lucky to learn from some of the best wig dressers in the industry, including Sue Pederson, who had worked at The National for years before joining Richard as his associate.  It was during this time that Richard gave me a job on my first West End show The Beautiful and Damned.  From then on I was hooked on theatre.  It’s a fun industry to work in because it’s live! That’s what makes it different from all the other mediums.  What you are involved in is entertaining hundreds of people, eight shows a week.  It’s a fun atmosphere backstage.  Everyone involved loves this industry, and so you don’t really feel like you are going to work. Don’t get me wrong, it’s hard work and there can be long hours – but there’s never a dull moment. 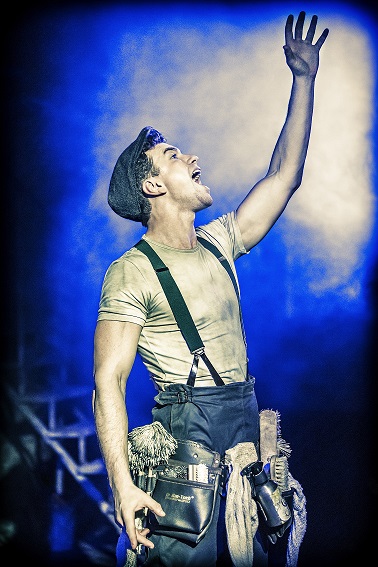 WP: Do you think people underestimate the use of wigs in theatre and TV/Film, assuming that the hair is the actor’s own? What are your thoughts on public perception of the industry?

GF: I do think that people underestimate the use of wigs in TV/theatre/film, but I think that’s because there are some amazing wig-makers out there, who are creating wigs so fine that they look real.  Even up close, or on your TV, they look like the hair is growing out of the person’s head.  It is then up to the wig dresser to style the hair in the most natural way so that we don’t give the game away. I don’t think many people are aware that there is a wigs industry.  I think they assume that it is just the same as going to see your local hairdresser. However working with wigs is quite a specialist area.  It’s different from doing someone’s own hair as you have to visualise what the finished product will look like when you put the wig on the actor, rather than the trial and error process you have when styling someone’s own hair.  You also have to fit the wig correctly, so that you can’t see the joins. To be honest with you, I think it’s quite nice that people don’t know about our industry because it means that we are doing our jobs properly.  I’d rather that than them saying, “Oh look at that dreadful wig!” 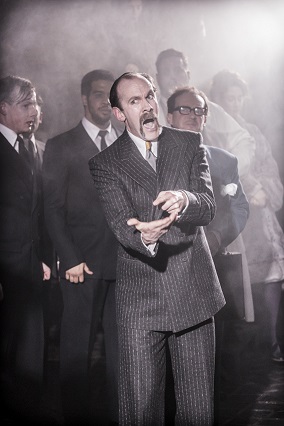 WP: You’ve worked with pop princess Kylie on two of her world tours – how did you get involved with that? What was the experience like with the constant packing up and travelling, compared to a static stage show?

GF: I have been very lucky to have worked with Kylie on two of her world tours since 2008.  I originally joined as the assistant make-up artist to the dancers, but after learning about my theatrical background and experience with changing hair styles quickly, Kylie asked me to start doing her hair for her tour.  I can’t pretend that I wasn’t nervous, but luckily she is as sweet and lovely as she appears to be and put my mind at ease straight away. It’s a brilliant team to be a part of.  Some of her crew have been with her from day one and it feels like one big family.  I suppose it has to be, as you are constantly on the move.  Every day you are up early, getting off the tour bus, showering in the venue and then getting set up for the show ahead.  Then as soon as the lights come on at the end of the show, that’s it, everyone is packing up and getting ready to move on to the next venue for the next day.  Sometimes you could be moving a few hours away, to the next city in the UK, or you could be going to a different country every day. It’s full-on, but it is a lot of fun.

During the show we are constantly changing Kylie’s looks and that means that her hair has to change too.  There are usually at least four different hair looks during the show that have to be created at the same time as she’s changing her costume.   It’s fast paced and everything has to be perfect, but that’s what makes it so enjoyable.  Forget jumping out of a plane.  If you want an adrenaline rush then you should work on a pop tour! 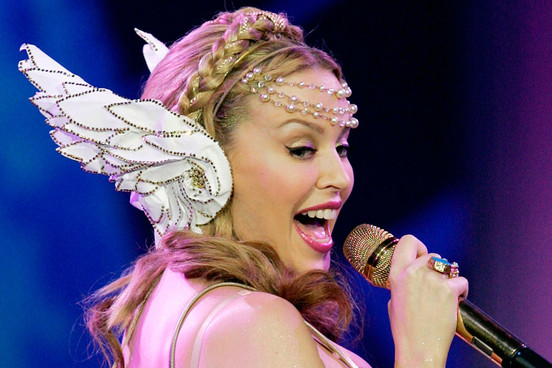 Kylie on her Aphrodite Tour 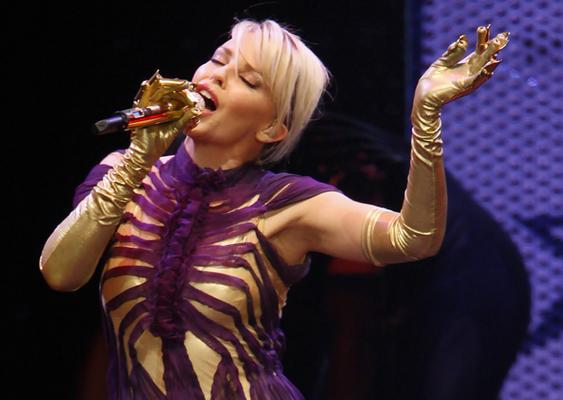 Kylie during the X Tour

WP: You’ve already worked on some of the biggest and most successful stage shows – Hairspray, Wicked and Grease.  Are there any that you would love to get to work on still?

GF: I have been very lucky that I have worked on some great shows.  The next one I would love to work on would be Jamie Lloyd’s Back To The Future.  I loved that film as a kid and it would be brilliant to get to be a part of bringing it to the West End as well as to get to work with Jamie again.

WP: Can you describe the look of the characters for Urinetown? With a lack of water, I would image it to be fairly grimy!

GF: Urinetown is set in a post-apocalyptic world where there has been a water shortage for decades, and therefore we have to make the characters look like they haven’t showered in a long time.  The wigs and hair styles for the poor people are all dishevelled and matted.  We have to add oils to the wigs to make them look greasy. The make-up look is also reflective of the world they live in.  Everyone has pale, sallow skin and dark eyes.  They are supposed to look unhealthy and on the edge of death. 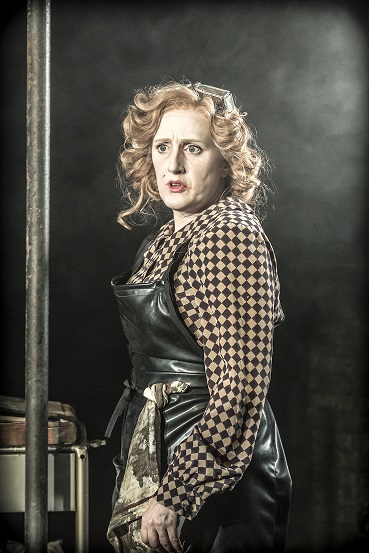 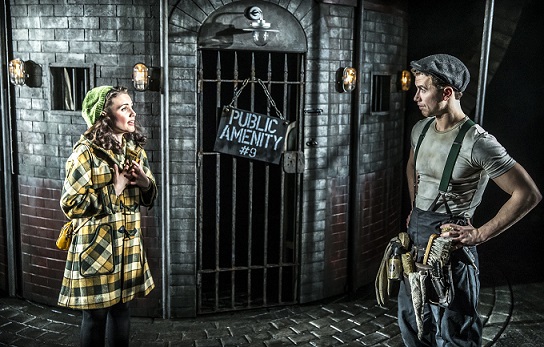 WP: How many characters are there who need to be made-up every day? How big is your team? How long does it usually take?

GF: I am the only person working in the hair and make up department of Urinetown with a cast of 22 actors . Therefore I rely on them to do their own make-up for the show as there just isn’t enough time to get round everyone.  They were all given a set look when we were setting up the show and they follow that look every night.  My main focus is on styling and applying the wigs and hairstyles to the actors in the half hour call.  Some days it can be tight to get everyone done in time, but we have got it down to 35 mins.

WP: Do you have any saviour products which you can always rely on?

GF: There are a few favourite products and tools that I couldn’t live without as they make my job that little bit easier.  The Tangle Teezer brush is my all time favourite tool.  It makes detangling wet wigs so much easier and you lose very little hair in the process, which is essential when brushing wigs.  The less hair they lose, the better. The Denman Anti-static Carbon Pin Tail Comb is my favourite.  The pin tail is the best of any comb as it’s very pointy, which means when you use it to part the hair it makes a super clean line. Bumble and Bumble Thickening Spray is the best of its kind.  I use this before blow-drying hair as it gives volume without leaving the hair sticky or crunchy. On Urinetown we use a lot of fake blood.  The best we have found is Nick Dudman’s Pigs Might Fly in Dark.  It looks real and, most importantly, washes out of the costumes and wigs easily without dying them red.  And it tastes and smells like toffee apples. 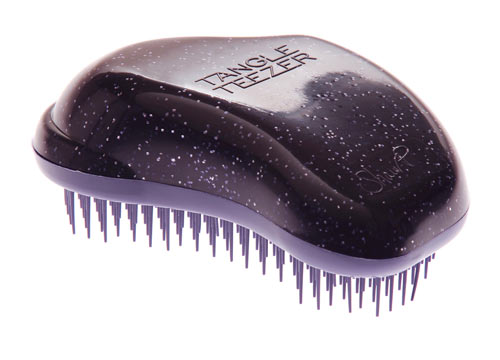 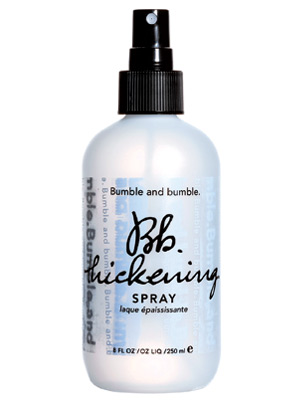 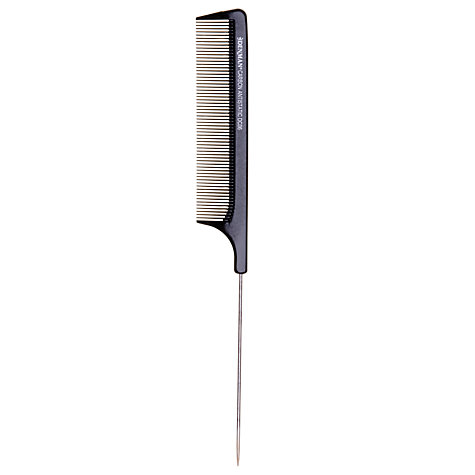 WP: Do you have any advice for aspiring MUAs or hair/wig stylists on how to break into such a competitive industry?

GF: My first piece of advice would be to ask yourself is ‘Do you want to be rich?’ because if the answer is yes, then this isn’t the industry for you.  You have to do this job because you love it as it’s about long hours and hard work, with not necessarily a lot of money.  If it still appeals to you, then great! It’s one of the most fun jobs there is. The best way to get in is to get as much experience as possible, even if that’s just practising on your friends.  I would also recommend going to college to train in your selected area; not just to learn new techniques, but also to get you used to working to deadlines.

Then, when you feel ready to, hand your CV in to the stage door of every theatre in the West End.  Make sure you find out who the head of wigs and make-up is on each show and personalise the CV to them.  Trust me, your CV is more likely to be noticed if you’ve taken the time to find out that detail. When it comes to your CV, don’t lie, you will always be found out.  Our industry is so small, and everyone knows everyone and what shows they’ve worked on.  Don’t be afraid to say that you don’t have any show experience.  We are always looking to find new talent and to help people gain experience.  Remember, we were all in that position at some point.  We know how hard it is. Don’t be disheartened if you don’t hear back right away.  Some shows might not need any extra people or be able to take on work experience at the time of receiving your CV, however they may do in a few months time.

And lastly, when you do get your chance, make a good impression. The best piece of advice I was given was to learn to read your client and judge if they want to chat or not.  This might seem like a simple piece of advice, but it will get you far.  Not everyone wants a Chatty Cathy in their room 15 minutes before a performance. 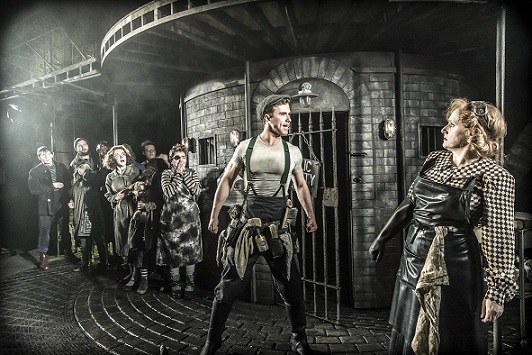 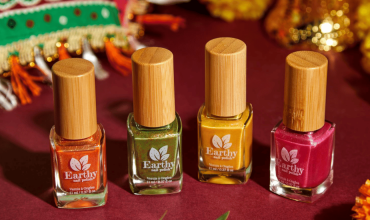