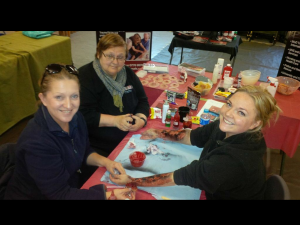 Make-up is, in its essence, all about transformation and creating a new reality – whether that be a bold, blackened red on the lips, the subtle minutiae of contouring and flawless-looking skin, or otherworldly prosthetics conjuring a different species to life.  But for Linzi Foxcroft and her team at Trauma FX based in the small North Yorkshire market town of Thirsk – famous as the location for the James Herriot books – make-up and prosthetics are used as a tool to help save lives.   By working with organisations including the Armed Forces, the Emergency Services and primary health care workers, the company creates ultra-realistic injuries which can be used in training exercises.  Their work includes employing actors (some of whom are amputees) trained in simulating casualties, creating realistic wounds, limbs and advanced Simbodies which can be used to practice skills to be used in the field.

Linzi, Managing Director and Founder of Trauma FX, as well as Head of the Make-Up Services, began her career with a degree in Film & TV design, which covered set, concept and, of course, make-up design.  Upon graduating, she spent 18 months working in the film and TV industry in various jobs.  “That’s when my true passion in make-up really started to shine through,” Linzi explained.  “I worked as a face and bodypainter throughout University, and continued that on the side once I graduated.”  Little was she to know that this innocuous interest would lead to the inception of Trauma FX. 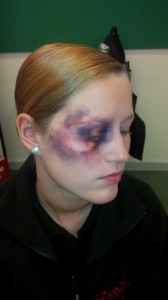 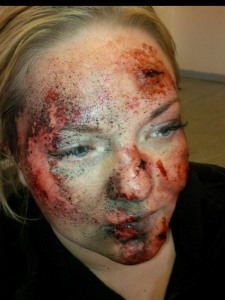 In 2004, Linzi was working at a little girl’s birthday party, when she got to talking with the girl’s father.  He happened to work for the Army Medical Training Services in York, and upon seeing her work he invited her to gain some work experience with the Training Services.  “That was my first introduction to the medical side of things.  Initially I knew nothing of trauma simulation.”  She recalled the limited means with which the Services were working with prior to her involvement.  “It was very basic.  They were using things like food colouring, plasticine, even crayons!  They were really pushed for support from people who knew more [about make-up].”

It was the military who put together funding support to help Linzi train others in how to create realistic injuries as part of their education.  “I was juggling work with starting the business,” she said.  “It evolved mutually between me and the military.  It was quite a gradual process, almost a joint effort.  They gave me a lot of direction in terms of realism and the actual mechanics of injury.  Given the time, I was working with people who had served in Afghanistan, who had actually seen these injuries we were creating.” 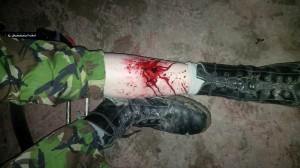 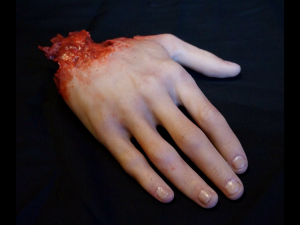 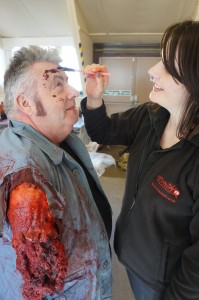 When discussing the realism of the injuries she has become an expert at creating them, and what sets Trauma FX apart from other SFX companies, Linzi summarised the company’s distinctive approach in four words:  “It’s about the mindset.  It’s how we approach the jobs; not from a TV, ‘will this look good on screen?’ angle.  That’s not what it’s about.  It’s about making sense to a medical professional.  It has to make sense to their world, not film and TV.  It’s a completely different audience we’re reaching out to.  It’s ‘will this work?  Will this educate?  Will this make sense to those using it as a learning tool?’  It’s actually a really interesting take on it, our knowledge has just grown and grown over the years.  It has to – the people we’re working with are the professionals!”

Trauma FX offer a variety of training courses, from single day courses for small groups to customised training support and mentoring for large teams.  They have also acted as consults and helped to create effects for the film and TV industries; their work on the film Inbred won Best Special Effects award at Fantaspoa in Brazil. 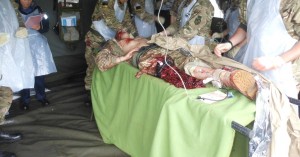 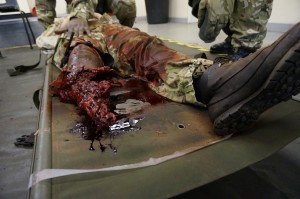 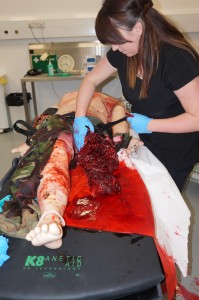 But it is their committed endeavour for realism which has gained them a worldwide appreciation for their work.  “I would say we’re best known for our frighteningly realistic make-up effects,” said Linzi, a touch of humour in her voice, “And for coming up with really innovative and effective effects.  We have to be forward-thinking; all of the different elements we do, as a business, have come about because there was a need, a demand.”  This spontaneity in the demands of their work is what led to the creation of Trauma FX’s own range of products, and their custom-made prosthetic pieces.  “We get asked to make things for certain situations, like ‘we need to simulate X’.  So we can make prosthetics directly and specialised for certain situations.  It’s not just for treatment either,” Linzi explained.  “We also work with people such as the mortuary services.  We provide limbs and body parts for them to learn what to do with them, how to document them, things like that.  It all has to make sense.  We make it all for a specific purpose.” 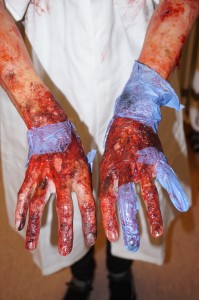 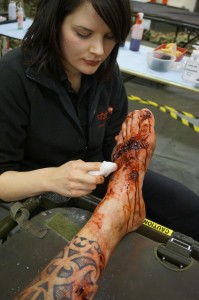 The unusual nature of the work they do bears a certain weight of responsibility which helps to form their ethos when approaching a job.  “It is quite a sensitive subject,” Linzi acknowledged, “especially when we’re dealing with people who have seen the events or simulations firsthand.”  But the company’s clinical approach and drive to create a realistic, educational environment aids their handling of these sensitive situations. 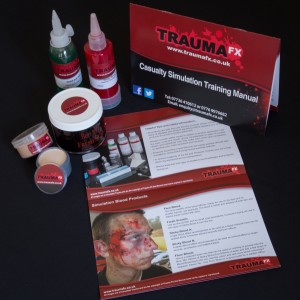 When the topic of kit staples for the SFX MUA came up, one item was firmly at the top of Linzi’s list: “Good blood.  Good fake blood.  Our blood withstands people dealing with our wounds as if they are real.  It can be used on both silicone and skin too.  Good blood and a good cosmetic silicone are the bases.”

While Trauma FX evolved organically out of a need, Linzi also had good insight and advice for MUAs looking to break into the industry, given her own career beginnings.  Unsurprisingly, her first piece of advice was to conduct plenty of research into whatever you are creating, the cornerstone of the business’ approach to the situations they are simulating.  “You can’t create a gunshot wound if you don’t know what a gunshot wound actually looks like!  But be comfortable in your own skills – have confidence, because it is a tough industry.  And keep a clean kit!  There’s nothing worse than showing up to a job with a mucky kit, with fake blood everywhere!”

For more information on Trauma FX and their services, you can visit their website: http://www.traumafx.co.uk/ 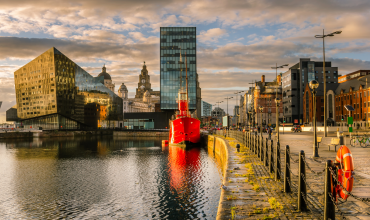