When we came across Alex Box’s incredible Fashion Issue shoot for Stylist Magazine, we just had to bring it to you.

The line between art and beauty has blurred this season. Illamasqua’s creative director Alex Box takes us on a journey through her favourite art movements told via make-up.

Spearheaded by Pablo Picasso, cubism reigned in the early 20th century. Subjects were deconstructed and reconstructed from a multitude of angles. Box’s take on the movement uses, “distorted perspectives and layers to create a geometric surface that pushes and pulls the perception of the face.”

Dadaism dominated art and design from 1916 to 1922. With a palpable humour, the Dadaists actively ridiculed the perceived pointlessness of the modern world. Here, Box reflects its absurdity by, “showing how you get there with visable safety pins.” 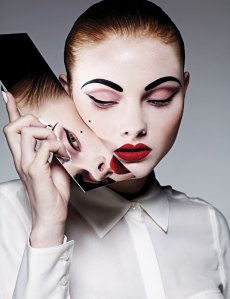 Postmodernism gained momentum as a movement in the late 20th and early 21st centuries and is characterised by the desire to find new angles. “The Postmodernism movement is all about new interpretations,” says Box. “I took a classic Forties look and juxtoposed it with a jarring modern twist – it’s a reinvention.”

With a bias towards emotional subject matter, the romantic era spanned the art, literary and intellectual worlds during the early 19th century. “This is the antithesis of Cubism. It’s a feeling,” says Box. “She’s drenched in emotion and the effect has no edges.”

Translating as ‘rough pearl’, the baroque movement of the 1600s was defined by dramatic intimations of grandeur. Of her interpretation, Box says, “I was inspired by decaying flaked paintings, the adornments reference the jewels of the time.” 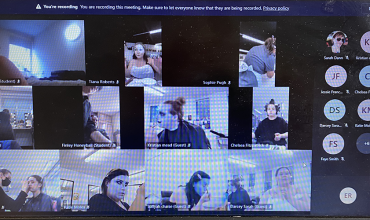 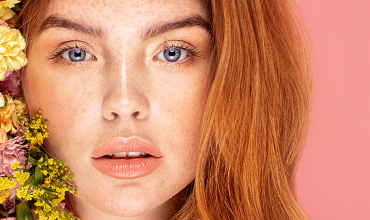