This Sunday sees the British Academy of Film and Television Arts Film Awards 2014.  The British Oscars have risen and risen in standing now attracting the great and the good from Hollywood in increasing numbers.  Whilst we love the red carpet looks on the night, we’re even more interested in one award in particular:  Make Up and Hair.

For 2014, five films are in the running.  All incredible different and diverse, we certainly don’t envy the Academy decision makers.

First up and in no particular order is Amercian Hustle.  Make-Up Head Evelyne Noraz together with Lori McCoy-Bell and Katherine Gordon are up for their ‘70s glam style look.  For Amy Adams’ character, Sydney Prosser, the former stripper from New Mexico, make-up was entirely inspired from old Cosmo covers according to Noraz.  The character evolves from a no make-up country girl to full on ‘70s chic and to do this Noraz started with the eyeliner.  “When she meets Christian Bale, her make-up starts to get darker,” Noraz explains, “to mirror the transition of the character in the film.”  For the film’s other female lead Noraz went for a much more mumsy look for Jennifer Lawrence.  But the actress’s natural beauty shone through, “I wanted to do a really nice job, when you’ve got a beautiful face, I can’t help myself – I’m a make-up artist!”

Shifting decades, next comes The Great Gatsby.  Up for the BAFTA are Maurizio Silvi and Kerry Warn.  The opulence and sheer glamour of the 1920s must have been an MUA’s dream.  The party scenes in particular were their piece de resistance.  Using predominantly MAC, Maurizio chose colours that not only match the hair and costumes, but also the colour of the cars in the period.  The lips are shaped in the popular ‘20’s cupid shape and the whole make-up looks of the period are based upon the classic red and black.  “The 1920s was a period of great freedom and expression in America,” Silvi explains, “Women’s make-up: pale skin, smoky eyes, bolder lips, curvy brows, lots of mascara and rosy cheeks are how they expressed themselves.”

The fantasy and creatures of Middle Earth are in the running with a nomination for The Hobbit: The Desolation of Smaug.  Peter Swords King, together with Richard Taylor and Rick Findlater, is hoping to add a BAFTA to his OSCAR in 2004 for The Return of the King.  The LotR Trilogy is a monster of a production.  The pressure on all departments was immense and none more so than for King and his make-up team.  Over 80 wigs alone were needed for the 13 dwarves, the majority working with Yak Hair.  Galadriel was a particular favourite for King, “I wanted to give her that magical quality so created a special light-reflective powder to make her appear extra luminous’”.

Oprah gets fitted with prosthetic skin

The art of ageing is what it’s all about in the next nominee The Butler.  Debra Denson, Candace Neal, Robert Stevenson and Matthew Mungle are the team behind turning Oprah Winfrey and Forrest Whitaker into pensioners.  “It’s an epic tale,” explains Mungle, “taking place over a long period of time, but the make-up had to be subtle as we aged the characters from young people to old age.  The audience had to believe it.” This film is the perfect example of how make-up can help in the story telling, “It’s a means to an end,” Mungle concludes.

Last, but by no means least, is Behind the Candelabra.  Kate Biscoe and Marie Larkin had their hands full turning some very well known faces in the equally well known characters.  Rob Lowe, Matt Damon and Michael Douglas not only needed to look in the period, but in the case of Douglas as Liberace himself and Damon as his young lover, like the people they are playing.  The audience know what these people looked like.  The challenge was to make sure the make-up did just enough, so you see Liberace, not Michael Douglas dressed up as Liberace.

We wish all the nominees the very Best of British Sunday night and are hoping the rain stays away for just one magical night. 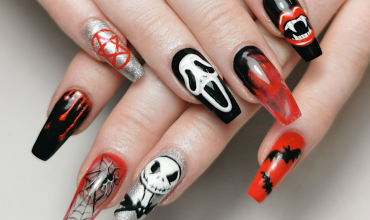